Over the years there have been plenty of giant, terrifying beasts that have been concocted in the imaginations of some of the world’s greatest filmmakers. Having graced the silver screen, many of these creatures have burrowed themselves into the minds of audience members for years after, playing on fears related to much wider social and cultural issues. Most evident is the infamous ‘face-hugger’ and ‘chest buster’ from Alien, the concept of which plays on the fear of pregnancy; whilst Godzilla was quite clearly a metaphor for city-destroying bombs.

The latest batch of flesh-eating creatures to bless audiences with their presence comes from the fantasy action feature, The Great Wall. To note the release, we’re taking an in-depth look at the history of monsters in cinema, and attempting to get to the bottom of who is the most bad-ass beasty of them all! 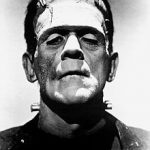 Before monsters that could scale buildings and trample cars made their way to the big screen, monsters that terrified audiences were much more relatable and human-like. Put this down to budgetary or technological constraints if you wish, but this most likely revolves around people becoming paranoid about their human counterparts between Europe’s world wars. “Frankenstein” is the name of the mad scientist who creates a monster by taking body parts from dead people. Upon placing a brain inside the head of the monster, the doc is amazed to find that his experiment is alive. When the monster breaks free and mistakenly kills Maria, a young girl he meets down by the river, the town is up in arms and aims to bring Frankenstein’s monster to justice, only to find it attempting to kill his maker in an abandoned windmill. This could symbolise fear of parenthood around the age of the perfect suburban family in the US. 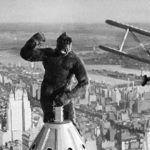 Being one of the first giant monsters to wreak havoc on an unsuspecting city, King Kong has managed to cement himself in popular culture as one of the most powerful beasts in modern fiction. He is first discovered by filmmaker Carl Denham (Robert Armstrong), who stumbles across the 50ft tall ape on the mysterious Skull Island, whilst natives perform a sacrifice for the beast. Once the big man catches a glimpse of the beautiful Ann Darrow (Fay Wray), he goes on a rampage in order to win her heart, which involves him snatching her up at any chance he gets and taking her as far away from any other man as he can. Jealousy issues much? The tale of Kong has since been re-told in many different ways and eras, but has always managed to emote a certain amount of sympathy for the beast, who in the end was killed by love. 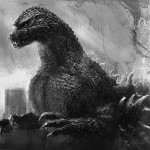 Filmed in 1954 as Gojira, this granddaddy of all Japanese giant-reptile epics was picked up for American distribution two years later, at which time several newly filmed inserts – featuring Raymond Burr as reporter Steve Martin – were added into the original footage. In both the Japanese and American versions of Godzilla, the story is basically the same: a 400ft amphibious monster, brought back to life by underwater nuclear testing, goes on a rampage in a tinker-toy Tokyo. The monster seems to have been forged from the memory of nuclear attacks on Japan during WWII, making it ironic that it became such a huge success across the pond. Though Godzilla is apparently destroyed in the film’s climax, this didn’t prevent Toho Studios from grinding out an endless series of sequels with the title character becoming less destructive and more lovable with each subsequent film. 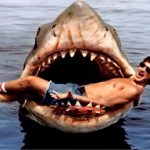 Based on Peter Benchley’s best-selling novel, Steven Spielberg’s 1975 shark saga set the standard for the New Hollywood popcorn blockbuster while frightening millions of moviegoers out of the water. When a woman is violently dragged down to the ocean depths after a late-night skinny dip, the seaside town Sherriff – played by Roy Schneider – becomes suspicious of a dangerous creature lurking beneath the waves. Once a few more beach-goers are graphically gobbled up by an enormous shark, confirming those suspicions, a team of hunters are sent to kill the beast and end it’s tirade on the town’s citizens, who remain desperate for a dip. Jaws feeds on the fear of the unknown. An inspired choice of music and the fact that Spielberg restrains from showing the creature, means viewers are kept on the edge of their seats as the carnage unfolds 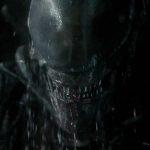 In very much the same vein as Jaws, Ridley Scott’s sci-fi horror classic set its creature amidst the unknown; only instead of the big blue ocean, it was the bigger, darker outer space. This is a clear example of how monster movies evolved by borrowing characteristics from the horror genre, with the blood and gore noticeably turned up a notch from creature features before it. The plot of the film very much resembles a haunted house movie, except instead of a haunted house it’s a cargo spaceship with a crew of innocent space truckers, and instead of a ghost or mad-mad, it’s a vicious, flesh eating alien. With conception of the Xenomorph taking place in a human stomach after a face-hugging creature impregnates the host against its will, the film tackles some pretty dark subject matter.  Whereas previous monsters such as King Kong and Frankenstein could engender a certain amount of sympathy from viewers, you’ll find no such luck with this double-mouthed extraterrestrial. 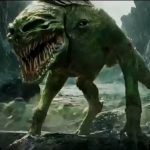 Cinema’s latest venture into monster territory comes in the form of Zhang Yimou’s The Great Wall. Set well before any of the other titles on this list, in 11th Century China, warriors are summoned to the nation’s greatest landmark to defend their people against a horde of alien monsters who rise every sixty years. Matt Damon’s William and his partner in crime, Tovar (Pedro Pascal), arrive at the wall as mercenaries on the hunt for explosive ‘black powder’, but are quickly kidnapped by those living there (including Tian Jing as the sassy Commander Lin Mae) as they harbour a secret… William and Tovar end up being in the wrong place at the wrong time, and soon find themselves having to lend a hand in fighting off the monsters from atop the wall in a bid to end the suffering at the hands of these mysterious creatures. What sets these creatures apart from others on this list is not only the sheer volume of them, but their ability to telepathically connect with their Queen and operate as a unit – proving a formidable force for William and Commander Lin to contend with in their bid to defend their beloved Great Wall.