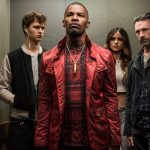 Warning: Going to see Edgar Wright’s Baby Driver will make you want to skip, hum and tap uncontrollably … Oh, and be able to do perfect handbrake turns. I have been so looking forward to seeing this film, and it absolutely did not disappoint.

The premise is simple. Ansel Elgort’s character Baby has tinnitus from being involved in a car crash so he listens to music all the time to block out the noise. Having attempted to steal his car, he ‘owes’ Doc (Kevin Spacey) so he performs truly thrilling getaways from crime scenes in various sporty looking cars. All done, of course, to an absolutely perfect driving soundtrack.

You could be forgiven for thinking you were actually watching a musical. Baby Driver is so wonderfully in sync. Every flick of the wrist, every gunshot, every step, every police siren is in flawless syncopation with the soundtrack. I wonder how many takes it took to get everything so completely perfect. It’s a tremendous feat that will leave you tapping your feet in the cinema.

In particular, the scene were Baby walks down a crowded street to buy some coffee feels like watching Gene Kelly twirl rounds the lamp posts in Singing in the Rain. Ansel Elgort puts in a wonderfully endearing performance as the taciturn driver; torn between his loyalty to Doc and his wish to be free of a life of crime.

The film is peppered with typical Wright humour, too. Baby has an endless supply of cool sunglasses, there’s a brilliant Mike Myers mix up and there’s even a truly hilarious Monsters Inc reference that will leave you face palming.

The soundtrack, as you would expect, is phenomenal. Wright is seriously giving James Gunn a run for his money. The film is named after the Simon 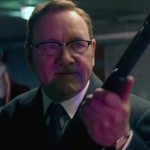 and Garfunkel song and is packed full of classics such as The Commodore’s Easy, Queen’s Brighton Rock, Martha and the Vandella’s Nowhere to Run and, of course, The Button Down Brass’ Tequila. You genuinely will be alternating between dancing in your seat and gripping the armrests during the car chases.

Given that the cast is fairly packed full of ‘big names’, there is no sense of someone trying to be the star of the show. Baby Driver is an ensemble piece in every sense of the word. Kevin Spacey is so effortlessly charming while he’s quietly threatening to cap your knees and murder your family; Jamie Foxx is as mad as a cat in a bath and dresses like Michael Jackson in his Thriller video; Jon Hamm genuinely always looks like a man on the edge. The dialogue is razor sharp and the performances ensure that a single line doesn’t go to waste; the beat is never dropped.

The only thing that felt like a tiny bit of a snag for me was the relationship between Baby and Debora (Lily James). I understand that, in his head, Baby imagines this sweet and wholesome 1950s doowop daydream for them in order to escape the grim reality of his work but it just felt a little too saccharine for me in a film that was otherwise fast-paced and devoid of sentimentality. But that’s just me.

The action in the film is fantastic. Who doesn’t want to see Kevin Spacey toting a shotgun? The car chases are choreographed perfectly; it’s quite thrilling to watch the cars zig zag and curve across crowded motorways. The shots inside the car really do put you in the driver’s seat.

I defy you to leave the cinema without singing to yourself: “W-w-was he slow?” over and over again. Baby Driver absolutely delivered and hit every single beat in the bar. Definitely a contender for one of the top five films of the year.