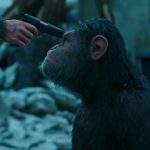 If you had told me, several years ago, that I would be rooting for the survival of apes (an animal I’m afraid of – it’s the weird thumbs on their feet) against the human race, I would have laughed at you. But Matt Reeves Planet of the Apes trilogy achieved just that. The last installment (for now), is titled War for the Planet of the Apes and, it really does demonstrate just how inhuman humans can be when presented with a uniform and a gun.

I’m not really going to go in to plot, simply because this film is just bursting with individual moments of pure beauty. It’s like a love letter to cinema. Andy Serkis has proved to be an absolutely phenomenal Caesar, with more emotion conveyed in his deep brown eyes and puckered lips than I’ve seen in most human performances. There needs to be serious recognition for everything he has achieved over the trilogy.

The first meeting between Caesar and Woody Harrelson’s Colonel Kurtz-esque character is so brimming with tension and anger that the lingering gaze between them feels unbearable. There is a real power struggle between the two; both flawed, both desperate for survival. The first time they lay eyes on each other sets this back and forth up beautifully. It’s dark, humid and dripping with testosterone; two alpha males determined to become heroes for their species.

The apes find themselves in a labour camp for most of the film and we really need to talk about what Matt Reeves has created in these scenes. The railroad tracks, dusted with snow, lead up to the main gate. Apes line the iron bars; frightened and starving whilst the humans utilise some of them as camp ‘guards’ to keep the rest of their species in line. Given that Harrelson’s character seems obsessed with historic wars, you don’t have to stretch too far to see what infamous camp this one resembles.

There are also neat little Vietnam War references – the sight of the helicopters storming through the sky, the shot of Harrelson shaving his head whilst looking over the camp and the fact that someone has actually scrawled Ape-pocalypse Now on one of the walls.

It’s a film that will truly make you question the bitter realities of war; how it can make you immune to suffering and how hollow victory can feel. It’s a film that firmly places you, shoulder to shoulder, with Caesar and his family – not the humans. 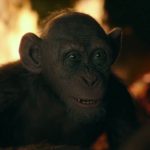 You could care less about them at times. Caesar is brutalised, humiliated and, quite literally, crucified for his desire to protect his species. It feels like too much to watch. However, one human with a redeeming gentleness about here is Amiah Miller’s Nova; a mute girl found in an abandoned lodge. She accompanies the apes on their journey to live peacefully in the North. The scene where she places a bright pink flower behind the ear of a dying gorilla will make your eyes bubble over and your bottom lip tremble.

As this is the last of the trilogy, and a summer blockbuster, you can also expect some endearingly funny moments (Steve Zahn’s Bad Ape is a brilliantly conceived character: The line “Humans get sick, apes get smart, humans kill apes” will haunt me forever) and some pretty spectacular stunts. There are some perfectly crafted, slow motion explosions that are almost poetic in their realisation. Most importantly, at no point does this feel like you are watching CGI. Humans and apes are walking around together, fighting and communicating. It’s a testament to how far the technology has come that, not only does it look good, you can actually feel something for the CGI characters. There’s nothing blocky or awkward about it.

War for The Planet of the Apes has seriously made me re-think my Top 5 of the year so far. It was stunning; so emotional and really able to pick apart your sympathies. It will challenge what you think and deliver on the blockbuster-standard explosions at the same time. The relatively open ending leaves some hope that Matt Reeves et al may deliver some more apes films in the future. Hurrah – A reboot that works!