Director Allison Anders’ Mi Vida Loca, comes to Barbican Cinema for a one-off screening on the 10th of October. One of the first major films exploring the experience of young Mexican-American women, the film explores friendship amongst women of colour, through performances by untrained actors. The screening is preceded by Top Girl, a short film by Rebecca Johnson, about black British best friends facing the realities of womanhood. The relevance and importance of Mi Vida Loca and Top Girl will be discussed with an introduction by Abondance Matanda, a writer described by Dazed as “one of the ‘new generation’ of poets mastering DIY culture”.

Both Mi Vida Loca and Top Girl feature collaborations between filmmaker and untrained actors: whilst living in the neighborhood, Anders’ used many Echo Park locals in Mi Vida Loca. Similarly Top Girl came to fruition through workshops with non-actors from Brixton, contributing to the script and providing an authentic, naturalistic quality and a space for the untrained actors to tell their stories and experiences. 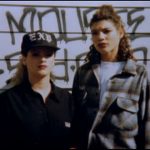 Sad Girl and Mousie have been best friends since childhood but their friendship turns into an icy feud when they both become involved with Ernesto: a drug dealer, and the father to both their children. As their dispute escalates towards violence, the film traces how this anger affects all the aspects of their lives in Echo Park, Los Angeles. The film centres around sisterhood and the decisions young women must make for themselves and their children to survive in a neighborhood that is quickly changing, both through gentrification and increasing violence. 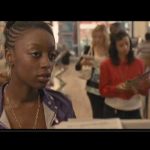 It’s the mid 2000s in Brixton, South London, and 15 year-old Donna and her best friend Felicia are juggling school with new feelings and finding their way in the world as young women. The two are on a mission to find Legz, a 20 year-old with a recording studio, in the hope for Donna to MC on a track but as expected, events don’t go as planned. A tender coming of age tale, with Rumbi Mautsi and Naomi J.Lewis shining in their remarkable debut performances as the two teenagers making sense of growing up in a man’s world.