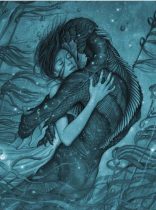 Guillermo Del Toro is a film maker of vision and imagination. He has consistently produced top quality and highly entertaining pieces of cinema for over twenty years. The fact that his last two films have not been met with the same critical acclaim they deserved (not here though!) is neither here or there. So, as his latest film opens the 50th Sitges Film Festival, there was no doubt that something special was coming. I wasn’t disappointed.

Eliza (Sally Hawkins) is a woman who lives apart from normal society. Mute since birth and found as a baby in the river next to an orphanage, she spends her nights cleaning at a secret government laboratory in Baltimore and her days with her aging and lonely neighbour Gilles (Richard Jenkins). It is a period of great change with the Cold War ramping up and the Russians just having put a man in space. Into Eliza’s life comes what can only be described as a Merman. Having been captured in South America is has been brought north for study. The agent in charge (Michael Shannon) is a god fearing, by the book, thug who uses the same technique in all situations, namely violence and intimidation. When Eliza forms a connection with the Merman she realises that he is more than a lab experiment.

Del Toro is no stranger to magical realism having used the same device in several if his previous movies. Here he creates a wonderfully realised version of 1960’s America. Everything is seen from the perspective of Eliza and it is through her that we are brought into the world. This isn’t the nuclear family image of the US with Mum, Dad and the two kids. Instead of a house in the suburbs, Eliza and Gilles live in old sprawling apartments which feel like they are from a different era entirely. Everything is a little run down with the colours of the rooms muted creating a real lived in feel. This is where Eliza can be herself. Her sanctuary if you like. The facility where she works is similarly outdated looking. This is no hi tech work place. The labs are walled with cracked and worn ceramic tiles and a general feeling of damp and used.

Sally Hawkins is superb in the lead performance. It takes so much in terms of technique and ability to produce such a sensitive and nuanced performance as hers. Without the use of the spoken word she conveys the fragile personality of Eliza with such grace. Her eyes say more that pages of dialogue can get across. So the film does not depend on just this aspect of Eliza’s character she is also proficient in sign language which is either subtitled or spoken back to her by another member of the cast. Hawkins a lot of small touches that really make her character stand out. A shy smile or a couple of quick dance steps are a joy to watch and they ensure that the audience is right with Eliza and always on her side.

The supporting cast are no slouches either. Octavia Spencer as Zelda is making a real name for herself as a standout actor in film after film. Here she is Eliza’s co-worker, friend and protector. She never stops talking which balances up the silence from Eliza. It never becomes too much and she is an important part of the film as so many of the themes the film is exploring touch on her life.

Richard Jenkins is Gilles, Eliza’s faithful companion outside of work. He is a struggling artist wanting to get back into the advertising agency he was unceremoniously fired from. He is made to feel ashed of his private life and has had issues with alcohol dependency. He struggles with life and the feeling that he is being left behind. All he wants is to get a bit of his former vitality and find someone to love. Not much to ask,  but he only has Eliza to help him remain in contact with the real world. Ironic that Eliza herself is so detached.

The main theme of the movie relates to how we fit into society. Every one of the main characters are outsiders for one reason or another. Eliza is mute, Giles is gay, Zelda is black and a woman. And then there is the creature itself. It is more of an outsider than anyone else. Those and the other supporting characters are not the norm in society. The film reviews what it means to be outside and if it really matters.

As with his other films, Del Toro knows how to make a monster. Here the Merman is humanoid in form but covered in scales and gills, it is designed in such a way to make the best use of its expressions which allows the audience to empathise with it while revelling in the strangeness of its appearance.

For many Americans these days the period of the late fifties and early sixties was seen as a golden age. Just after the second world war and before the turbulent times from the shooting of JFK onwards it seemed like the ideal time. For Eliza and Gilles living in that time it is a very different prospect. They look to before then for their comfort. It is the older musicals of the thirties and forties that appear to be their golden age. With the advent of television and its boom in the sixties, it has made them more isolated than ever with no reason to leave their rooms to experience entertainment.

The Shape of Water totally captivated me and will quite possibly be near the top end of my films of the year. Highly recommended.