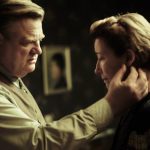 When Hans Fallada sat down to write Every Man Dies Alone, he was creating one of the first anti-Nazi books to be published in post-war Germany. Having spent many years incarcerated in an insane asylum, Fallada found it easy to translate his first-hand experience into a scathing attack of like under National Socialism. The novel became known, in English translations, as Alone in Berlin, and it is from here that the film takes its title.

Fallada’s book is so incredibly tense and haunting; every single movement, thought or action is fraught with fear and guilt. At the heart of it all are Otto and Anna Quangel, an apolitical, middle-aged couple spurred into creating a small resistance movement. Their son has perished in the war and – frustrated and unable to cope with their grief – they begin delivering anti-Nazi postcards all over the city. It might seem like a small or futile retaliation but, in an era when you were encouraged to report your own spouse or parent, it is an incredibly daring act.

Vincent Perez’s film is visually grim – and that’s not a reflection on poor directing or cinematography, more a point about wartime Berlin being washed in murky greys, greens and browns. It is nothing like the bold red and black displays of Nazism that were beamed to the world.

It’s a film that is typically Teutonic in its reserve – there are no real outlandish displays of emotion or drama. And, perhaps, this is where I found it slightly lacking. For a film that deals with moments of real hold-your-breath style tension, there are no specific peaks and troughs. Everything moves at a relatively steady pace. Maybe this is designed to let the viewer see that the mundanity of everyday life carried on alongside both the war and the resistance movements.

However, I imagine that writing and delivering these postcards (or being the poor soul that found them) would incur more than a slight shake of the hand. Like The Book Thief before it, Alone in Berlin fails to capture the true horror of life in a permanent state of uncertainty. 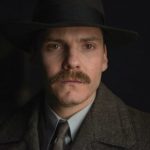 Having said that, the film is held together by truly solid central performances from Brendan Gleeson, Emma Thompson and Daniel Bruhl. You can see how Thomson, as Anna, slowly realises the futility of her work in the Nazi Women’s Movement after the death of her son and is determined to be defiant in her own, quiet way. The interrogation scene between Brendan Gleeson and Bruhl’s Inspector Escherich is particularly gripping. Gleeson’s Otto Quangel is not a man who is politically motivated; simply bereft at the loss of his only child. Lars Rudolph also stands out as the rather pathetic figure of Enno Kluge.

There have been many comments on the use of English actors for the most part of the cast. Perhaps this is what the film is lacking – an insular perspective on wartime Berlin. Gleeson and Thompson do manage to keep up their German accents (sometimes sounding more pronounced than Bruhl) but I can’t help but wonder how the film would have turned out in the hands of say, Dennis Gansel or Oliver Hirschbiegel.

For me, the film drew many comparisons with Sophie Scholl: Die Letzren Tage – not only in the concept of a resistance movement, but several specific shots, such as the scattering of the postcards or the view of the guillotine. There is also another glimpse into the farcical nature of a Nazi court where, in a final act of defiance, Otto and Anna hold hands.

Alone in Berlin is a solid, steadily paced drama with great central performances. Sadly, it never quite captures the extreme fear and tension of Fallada’s pulsating novel.