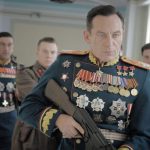 How do you make widespread poverty, fear, labour camps and shootings seem funny? You create a comedy of terrors, of course. Armando Iannucci’s latest scathing satire succeeds in having you laugh out loud for minutes on end, only to be hit with a punchline that will bring you screeching to a halt. Watching this film felt a bit like going to a pantomime. People in the cinema were laughing, clapping and gasping along to the slick, sharp one-liners and political farce.

As the title suggests, the film deals with the aftermath of Comrade Stalin’s death; how his people and, more intriguingly, how his political committee reacted. As if we didn’t already know, Communist politicians were every bit as back-stabbing and power grabbing as the Nazis when it came to securing their “rightful” place, as they saw it.

Iannucci has crafted an phenomenally witty piece; with one-liners and verbal attacks that would make Malcolm Tucker blush. He weaves, effortlessly, from black humour to deadly serious. From the outset, when two poor radio broadcasters realise they haven’t recorded a symphony that their dear leader would like a copy of, absolute panic and chaos descends. No one can leave the auditorium, and the search to find a new conductor gets confused with the nightly knock on the door from the NKVD. You can really sense how terrified these people are; in particular, Paddy Considine’s character is clearly frightened that a mistake will result in a rather permanent trip to Siberia. It’s a brilliant opening sequence that successfully sets the tone for the rest of the film.

But before Stalin can relax in his dacha and listen to the record, he promptly drops dead. The reaction to this is brilliant. No one wants to be the one to say he is dead, and they are all trying to outdo each other in their outpourings of grief. Watching them all try to come up with profound soundbites for the grieving masses is brilliant. 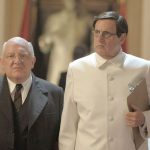 Each of the cabinet are introduced with a small surtitle – although those with a good memory are sure to work out who is who. Names like Khrushchev (Steve Buschemi), Molotov (Michael Palin), Malenkov (Jeffrey Tambor) and Beria (Simon Russell Beale) will be more than familiar. Their cacophony of accents – we have everything from the Queen’s English to someone from Queen’s, New York – only adds to the humour and the delivery.

Really, there aren’t enough superlatives for the ensemble cast. Rupert Friend is hilarious as the petulant, drunken Vasily Stalin. Buscemi is on fire as he plots and schemes his way to the top. For me, Simon Russell Beale stood out as the odious Beria – a man with a fetishised taste for violence and young virgins. His role is part pantomime baddie – delivering menacing “mwah ha ha’s” under his breath – and partly a real comment on the twisted and dangerous effects of giving someone too much power.

However, for me, the stand out was Jason Isaacs. He’s not in the film as much as the trailers would have you believe, but he steals every scene he is in. As the Head of the Russian Army, he struts about, puffing his chest to display a ludicrous amount of medals. He speaks in a thick Yorkshire brogue and generally just likes to be either shooting or eating. His comic timing – particularly the way he throws off his cape and flicks back his air – was absolutely perfect. His performance was thoroughly enjoyable.

As you would expect for an Iannucci creation, the dialogue is drenched in sarcasm and moves at a quick pace. He doesn’t even let up for the funeral scenes, wherein a ridiculous game of Chinese whispers provides light relief for the sense of overwhelming panic that is descending. It’s pretty amazing how he has managed to create wonderful, clever farce and wit from a particularly dark period in history. Albeit, life under Stalin was horrendous – but the unknowns of the future and a new leader frightened the Russian people even more.

The Death of Stalin is, for me, Iannucci at his very best. There is so much packed in to the 100 minute run-time, I will no doubt get even more out of a second, third and fourth viewing. The cast are on top of their game, delivering one-liners, eye-rolls and dramatic flourishes with flair and joy. You can tell they have really enjoyed themselves with this. It’s wickedly funny, with a truly serious punchline – even the end credits will make you think about the gravity of the situation.

It’s definitely a contender for one of the best comedies this year.