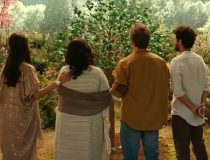 I don’t doubt for a second that writers John Fusco, Andrew Lanham and Destin Cretotn, and director Stuart Hazeldine are genuinely good people who wholeheartedly believe in a loving God who is there for all her/his children and that faith in Her/Him makes everything better in spite of the evil that humans must suffer.

They have endeavoured to prove this in The Shack by answering such a question as, why does God allow such evil things to happen as a young girl being murdered (and presumably tortured or abused) by a serial killer?

While tackling something of such gravity is brave indeed and although the film is at times endearing and moving, ultimately it fails to answer the questions it dares to ask.

Sam Worthington plays Mackenzie Phillips, a troubled man who is already wrestling his own demons about a past involving an alcoholic father (Derek Hamilton) and a tragic secret (that is a tad vague) when he takes his children on a camping trip. In a heroic act he jumps into the water to save his son, Josh (Gage Munroe) from drowning only to discover that his youngest daughter, Missy (Amelie Eve), is missing. The FBI is called in and they lead Mack to the shack where there is evidence of Missy’s murder at the hands of a known serial killer.

Mackenzie is drowning in grief when he receives a note to go back to the very shack where his daughter’s dress was found. Instead of confronting the serial killer as he imagines he will, Jesus appears and takes him to the country cottage he lives in with God and the Holy Spirit in the woods. 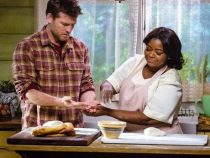 It turns out God is sometimes a motherly, black woman called Papa who cooks (played by Octavia Spencer) and at other times a world-weary American Indian (Graham Greene). Jesus (Avraham Aviv Alush) is a handsome, brown-skinned carpenter who can walk on water and wants friends not slaves, and the Holy Spirit (Sumire) is a beautiful Japanese lady who tends to a wild garden.

I have to say that I much prefer this scenario than the one that is proposed in the bible. The cinematography and the imagery do create a lovely picture of the world as seen through the eyes of the Holy Trinity, and some of the quips and conversations are endearing. However, many of the scenes are too corny or cheesy even for me, like Jesus and Mack running over water, or God and the Holy Spirit dancing in the kitchen. Although, perhaps if this had not been in the same movie as one with such a traumatic storyline, I may have taken to it a lot more.

Mackenzie of course asks the questions we would all ask of God: “How could you let that happen to an innocent child? How could you create people who carry out such evil and ask us to forgive them?”

The answers are vague and enigmatic. Wisdom or Sophia (Alice Braga) tries to give Mack a lesson about how it feels to pass judgement and God tries to let us know how hard it is for Her to do this, although it’s not clear what Her choices are. Eventually, Mack demands an answer, and it seems to be that some people God made turn into serial killers because there is evil and God has to try to bring them round. No discussion about where this evil comes from, whether God created it and if God is able to fight it.

Ultimately, the two parts of the film just don’t fit well enough together and the inevitable turnaround in Mack just doesn’t seem believable. For the narrator to say at the end that Mack’s days are now filled with joy seems hollow. I know in my heart that it could never be the truth for someone who has lost a child in any way, never mind in that way. Yes, they could experience moments of joy again, yes they could heal, yes they could forgive, but I can’t believe that their days would be filled with joy thereafter. Particularly because the question still remains unanswered as to why anyone would create a child and allow them to suffer in such a way. I am not saying there is not a reasonable answer, just that this film doesn’t answer it.

2 thoughts on “The Shack”