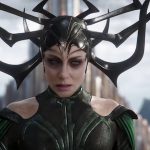 Taiki Waititi has done something pretty incredible with Thor: Ragnarok – he’s created a film that is both distinctly his own and a recognisable part of the Marvel Universe. It’s a film that blends these two distinct voices with vibrant technicolour, dry wit and exciting action sequences. He has given Marvel the injection of humour that they absolutely needed … Take note, DC.

As much as I love these comic book adaptations, far too many of them have attempted to repeat Nolan’s success, favouring grim and brooding over the joyous romp that they could be. Graphic novels are bursting with colour and witty one-liners, but these have somehow become lost. The Dark Knight Trilogy was fantastic, but not every superhero film needs to be that dark.

Whilst retaining the action and pace that these films are well-known and loved for, Waititi succeeds in imprinting his own visual flair and humour on the Thor brand (however, I’m still not entirely willing to forgive him for the loss of Chris Hemsworth’s luscious locks). The bromance between the God of Thunder and The Hulk blossoms and the supporting characters – such as Loki, Hela, the Valkyrie and Skurge – are full and well-rounded. No one is a throwaway or kept in for the sake of it.

As you will have no doubt guessed from the trailers, Ragnarok is visually bold and exciting. I still get tingles when lightening ripples through Thor and his eyes light up with rage. I love the fact that the Hulk has Mark Ruffalo’s haircut. Some of the scenes are so breathtaking in their realisation, particularly the ride of the Valkyries and pretty much anything where Hela is involved, that you would think you were watching art come to life. The junk strewn streets of Sakaar are come to life in glorious technicolour, whilst Asgard is an usual mix of glistening golds and moody greys. 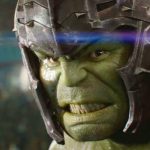 Led Zeppelin’s Immigrant Song is used sparingly enough throughout the film and really adds something to the action. It’s almost like a war cry as the various characters gear up for a fight.

The cameos are every bit as funny and interesting as you would hope – there’s a couple of genuine surprises in there – and take place towards the start of the film so as not to detract from the rest of the plot. Waititi’s own role, as Korg, is absolutely hysterical. He steals every scene he is in and has one of the best lines of the film: “I tried to start a revolution once but I didn’t print enough pamphlets. Only my mum and her boyfriend showed up.”

I loved the relationship between Thor and the Hulk; the rivalry and banter between the two characters was never forced. The back and forth between them is a lot more fun than Tony Stark’s eye rolls and sarcasm. Tom Hiddleston’s Loki has also become more than just a snarling pantomime villain. Jeff Goldblum is clearly having the time of his life as the outlandish Grandmaster. He looks like he belongs in the glam rock band, Wizzard.

For me, however, the standout was Cate Blanchett. She hissed and purred her way through every line; stalking across the screen like a panther snaring its prey. She looks phenomenal – from her costume to her ghostly smoky make up – and I loved her physicality. The way she smoothed her hair to reveal her headdress was brilliantly slick. She was a credible and exciting villain.

This is not an unimaginative, tonally bland contribution to the superhero genre. Waititi has created a truly bold vision for the Marvel Universe; one where humour and well-executed action sequences go hand in hand. Ragnarok is quirky, outrageous and well-thought out. Brilliant, creative and just good fun.