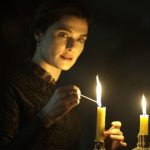 My Cousin Rachel is all dressed up as a mystery-romance but it is really, like Rachel herself, a story of rebellion.

Rachel Weisz plays Rachel, the devastatingly beautiful widower who may run around seducing and killing men for their fortunes, or who may be something as dangerous as a sensuous woman alive in the 19th century.

Sam Claflin is Philip Ashley, the arrogant yet strangely naïve protagonist who spends the first act stomping around as though the whole of England were his and his alone, enjoying the role of master with a childish pomposity; filling his guts with meat and wine. Tellingly, he narrates that in his childhood, “The only women allowed in the house were the dogs.” He decides Rachel is a villain as soon as he first hears her name mentioned. “Why would he need a woman?” he proclaims when his adoptive father, Ambrose Ashley (uncredited Deano Bugatti) writes from Italy that he has met and fallen in love with his cousin, Rachel.

His idyllic life in the English countryside is upset by the mere thought of Rachel, and it’s not long before he is proved right when he receives a plea for help from Ambrose, only to arrive in Italy to the news that he is dead. Convinced Rachel is a murderess, Philip is intent on confronting the woman.

Of course, Rachel appears at the house and confronts Philip with nothing more than endearing femininity. Philip who has never come across such a beautiful woman, very quickly forgets about his suspicions. All his pomp is useless against the passionate and darkly handsome Rachel. With very little effort at all, she has at her disposal an infatuated little puppy that is willing to give her everything.

Iain Glen plays Nicholas Kendall, the godfather and guardian of Philip’s estate, reasonable and polite in his disapproval, which is of course lost on the infatuated Philip; and Holliday Grainger is Louise, the pale, quiet, English girl, waiting patiently for Philip to see her potential as a wife. They try to warn Philip of his recklessness with rumours of promiscuity and her ‘limitless appetite”. Their cautions are only heeded when Philip seems to be suffering from the same illness as his late adoptive father. Is it poisonous teas, an illness of the brain, or jealous infatuation?

Shot after shot of My Cousin Rachel is beautifully framed. The English countryside is portrayed with as much passionate lure as Rachel herself. The score is delightfully eerie and an excellent accompaniment to the enigmatic shots of Rachel’s daring brown eyes. Director Roger Michell treats Du Maurier’s story with the upmost respect and you can’t help feeling that she would have relished the film’s ambiguity and the questions it poses about femininity.

Still, it is the performance of Weisz that gives the film it’s fire, she has never been better – confident and focused, yet vulnerable and as womanly as it is possible to be. Is that her only crime or is it something more sinister?

As always, Du Maurier’s tale is mysterious, the outcome as tragic as it is mystifying. Who is the true villain? What were the motivations of the characters and can we be convinced of the goodness of one and the badness of the other? Like Rebecca, it’s a story that you will think about for a long time after, and it’s Rachel you will think about.