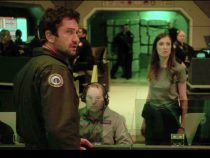 Geostorm is not a good movie. That kind of goes without saying. What it is not is the worst film you will see this year. despite what some critics are saying, this is a fairly average film that just about achieves what it sets out to do. There is a tendency these days for some to jump on the back of other opinions and just amplify the hate. Geostorm was perfect fodder for this. A troubled production and more than one change in release date marked it as a turkey before anyone saw it. when it finally hit the multiplexes it didn’t stand a chance.

The story is far fetched to say the least. In the wake of devastating storms all over the planet, the international community came together to develop and implement a system that controls the extremes of the weather. The principal scientist in charge Jake, (Gerald Butler) put in place a system that worked beyond all expectation. All was good for three years until just before the ownership of the system was due to move away from the hands of the US government. Firstly Jake is fired and then a series of anomalous weather events cause disruption and danger to life. The new head of the system, who just happens to be Jake’s brother, has to re-connect with his elder sibling and work out what is causing the issues before it gets out of control and puts the entire planet in jeopardy.

With the previously mentioned production delays and multiple re-shoots it is a wonder that there is even a coherent film to view. Unfortunately you can see the joins where plots and character arcs were altered to appease the money men who were not happy with the feedback from the initial test screenings. There is too much going on here to keep everybody interested. The film is split between the Gerard Butler action scenes set on the space station and Jim Sturgess’s plot thread set in the heart of the US Government. Cutting back between the two does either no favours and becomes a distraction after a while.

Butler is his usual action man persona here. This isn’t a bad thing though as the best of the action takes place in space. It is certainly the more interesting story arc. He in no way stretches himself in terms of performance but that is fine as his character is a cog in a much larger machine that is dominated by CGI. Also, he doesn’t stand out as the biggest hammy actor on screen. There are several other offenders for that honour. Ed Harris is at the head of the queue in his role as the Vice President. He must have seen the film for what it was and just decided to go a big as possible.

The film is let down a bit by the CGI. Some of it doesn’t stand up against what is the industry standard these days. The space based scenes were fine but it was the rendering of the Earth based weather events that just didnt sit right at times. If anything, it felt a bit incomplete. Surely, given the production delays, this couldn’t be the case? It looked as if it need a bit longer to get it just right. It isn’t massively distracting but in a film that fails to hold your attention for too long it can be a problem.