Up until fairly recently reviewing When The Wind Blows would have been approached from a very different point of view. The idea that entire countries, if not the whole world, lived in fear of dying in a nuclear war seemed to be a very old notion. With the end of the Soviet Union and the subsequent dismantling of its nuclear stockpile, the threat of imminent destruction faded into the background. Sure there were rogue states still carrying out testing but it was not as much in the public consciousness. That was until the Unites States elected a petulant toddler as president who started to have argument with North Korea over who ahs the biggest nuclear button on their desk. That kind of rhetoric has sharply the focused the minds of many about just what a nuclear winter might look like. So, the BFI re-release of Raymond Briggs animated film When The Wind Blows seems all too relevant.

Jim (John Mills) and Hilda (Peggy Ashcroft) are an elderly couple enjoying their retirement in the English countryside. Jim has come home with a number of pamphlets detailing what to do in the event of a nuclear attack. Through the national newspapers and the radio the threat of a strike is relayed to the general populace. Jim, a pragmatic man, takes all this in his stride and uses the information provided to prepare the couple for the possibility of a bomb dropping. While doing this he reminisces with some fondness about world war two and how the plucky British spirit was enough to see them through. When the event actually arrives, the reality is very much removed from the what has come before.

This film was quite controversial at the time. It is from Raymond Briggs, the writer of the much-loved Christmas animation film, the snowman. This is a very different beast. Presented in part with the same style as his previous work, the film is a lot darker in its subject matter. It focusses on the naivety of the central characters and just how unprepared they are for what is to come.  All they have to prepare for the threat of a nuclear winter is a series of pamphlets. The information is acronym heavy, is contradictory depending on whether the source is from national or local government, and is of little help. For instance, they are instructed to cover the windows but with no explanation why. Then when the blast hits the windows are disintegrated anyway. 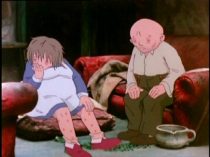 Both central characters appear to be in denial about what is going on. Jim’s wife Hilda just wants to ignore it and sees it as a distraction from her everyday life. It is something that Jim uses to focus on. He seems the type of person who needs to be busy which isn’t really suited to his retirement situation. With nothing to compare it against he constantly refers back to the second world war and how the threat was defeated by true British pluck. You get a sense that he does actually realise what is going on but is trying to keep upbeat and hope for the best. It is only when Hilda’s radiation sickness really kicks in does he let the façade slip.

The Raymond Briggs style is used for the characters which are overlaid onto different formats including models and different styles of animation. it reinforces the sense that the couple are living in a bubble and are not fully comprehending the seriousness of their situation. The characters are both slightly rotund and jolly looking which makes their gradual transformation into people who are obviously dying from the inside all the more compelling. Slight changes to the complexion and the facial features indicate the stages of the illness affecting them both.

This is no cartoon for kids. The themes and images are a look back at a time when people keenly felt the threat posed by a so-called nuclear deterrent. Hopefully we are not revisiting it anytime soon.