Slow motion is the go to guy when you want to underline a scene. Whether you’re trying to evoke emotion, draw attention to a specific act or, frankly, just look really cool, slo-mo is the director – and movie star’s – friend. No-one knows this more than the icon that is The Hoff. Having cornered the market in slo-mo back in the 1990s with the global appeal of Baywatch, the art of running in slow motion has become his signature move. In honour of the great man, let’s take a look at some other stand-out uses of slo-mo on film. 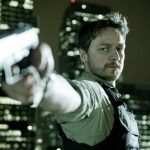 Director Timur Bekmambetov makes zero effort to hide his fondness of slo-mo in this ridiculous action thriller. The plot revolves around Wesley (James McAvoy), a frustrated office worker, who learns that he is the son of a professional assassin and that he shares his father’s superhuman ability to curve bullets around corners. Recruited by the Fraternity, a group of assassins who maintains balance in the world with similar powers, Wesley’s abilities are revealed to him in an intense demonstration whereby fellow Fraternity member Fox (Angelina Jolie) stands between him and a target and tells Wesley to hit the bullseye. Wesley runs up, whips his shooting arm around and fires. The slo-mo kicks in and the bullet swings silently around the still, unfazed Fox; brushing past her hair and sailing into the bullseye. 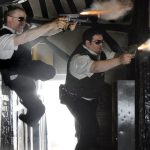 In Edgar Wright’s cult classic Hot Fuzz, “policeman-officers” Danny Butterman (Nick Frost) and Nicholas Angel (Simon Pegg) partake in a breath-taking shootout versus the evil Neighbourhood Watch Alliance in the Battle of Sandford. Amongst the chaos, Wright finds time to pay homage to Michael Bay’s detective comedy thriller Bad Boys II (“You ain’t seen Bad Boys II?!”). Cop-film lover Danny replicates Will Smith’s horizontal leap through the air, firing two guns simultaneously at his target. Now, if you film a man jumping sideways through the air firing two guns at once in real time, it doesn’t last very long and it ends up looking a little bit silly. Bring on the slo-mo! 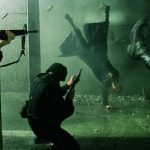 It would be interesting to know the exact percentage of scenes filmed in slo-mo in The Matrix. If anyone has any spare time on their hands, do let us know…! We suspect it’s very high. As such, it was a tough task picking our favourite, but we’ve gone for the legendary rooftop bullet-dodging scene. Caught in an epic shoot-out with Agent Jones, Neo (Keanu Reeves) empties two full clips leaving himself defenceless. Agent Jones takes aim from point blank range and fires, forcing Neo into an iconic, back-bending evasion. The scene is slowed down and we see the bullets ripple through the air and whizz mere inches past Neo’s face; an unforgettable move and surely a cornerstone of cinema for any aspiring action-thriller directors. 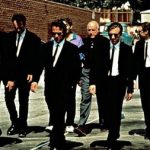 Reservoir Dogs announced one Quentin Tarantino to the world in no uncertain terms. A heist movie that joins the heist after it’s been botched, this audacious debut seared itself onto the retinas of all who saw it – and everyone saw it. The film has since been responsible for a lot of very, very lazy fancy dress decisions and we’re not sure it should be forgiven for that, but it also delivered some of the most emulated and explosive scenes in cinema history, not least of which being the casual, slo-mo long walk that frames our antiheroes. Harvey Keitel, Tim Roth, Michael Madsen, Steve Buscemi et al have all gone on to great things (and Tarantino has done alright since) but it’s hard to imagine a more iconic ensemble or a more successfully bottled zeitgeist. 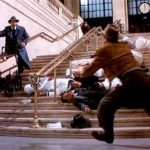 Brian De Palma has, at various stages in his career, been a virtuoso and a master of schlock but The Untouchables is arguably a high water mark in an undoubtedly dazzling career. Retelling the oft-filmed story of Elliot Ness (Kevin Costner) and his war against Al Capone (Robert De Niro), which included casting perma-Scot Sean Connery as Irish Jim Malone, the film stands up as a classic, with many fans recounting one standout scene. The slo-mo shootout on the steps of Union Station itself nods to 1925’s iconic Battleship Potemkin, which saw a child in a pram become horrifying embroiled in the violence of war. In Eisenstein’s Potemkin scene the pram serves as a proclamation against the savagery war brings whilst De Palma’s take (practically a wholesale recreation) effectively serves his plot in a microcosm – the good guys are horrified, the bad guys will do what they need to do. Proof, if it were needed, that slo-mo doesn’t always equate to cheese. 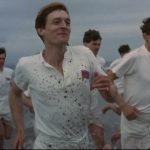 British classic Chariots Of Fire is famous for a host of reasons, be they writer Colin Welland proudly announcing  at the Oscars that ‘the British are coming’ (news rarely greeted with rapture in historical terms), the iconic score from synth-maestro Vangelis or its painstaking recreation of period Britain in all its glory. It is also, though, infinitely famous for it’s slo-mo running sequences. The film opens with a band of athletes training on a beach so bleak it could only be in Britain in what is arguably the pre-cursor to The Hoff’s own slow paced jaunt across the sand in Baywatch and beyond. The story of Harold Abrahams (Ben Cross) and Eric Liddell (Ian Charleson) as they take different journeys to the 1924 Olympics, the film remains stirring stuff, as much for the slo-mo as anything else.