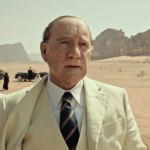 On the morning of Friday 26th of October last year, my phone absolutely exploded with messages from friends and colleagues asking how I was taking the news. As a lifelong Kevin Spacey fan, the swathes of allegations facing the man who adorned my walls and made up a huge chunk of my viewing history, were particularly difficult to come to terms with. It’s something I am still struggling to make my peace with, and I am unsure as to whether or not some of my favourite films are tainted by what’s happened.

So, there was some sense of irony, when, in the middle of the furore, Ridley Scott dramatically announced that his latest film, All The Money in the World, would remove every last trace of Spacey in favour of veteran actor, Christopher Plummer. You don’t have to delve too far into Plummer’s 2008 memoir, In Spite of Myself, to realise that he is no angel, either. He talks about “raping young girls with his eyes” and plying his much younger Sound of Music co-star, Charmian Carr, with alcohol in a bid to get her into bed. Scott essentially replaced one old lech with another.

Then came the outrage surrounding Mark Wahlberg’s paycheck for the aforementioned re-shoots. He negotiated a $1.5m fee since he had to have costumes refitted and take time away from other projects. Michelle Williams did not want to be paid, but had to accept a nominal fee of $1,000 for legal reasons. Wahlberg – arguably the bigger box office draw – didn’t exert his white male privilege over his co-star. Both of these actors are represented by the same people – there was no case of “the gender pay gap” here; one wanted paid and one didn’t. End of story.

The black dress protest at the Golden Globes was irksome. So many female stars complain that, on red carpet interviews, they are only ever asked about what they are wearing. So why choose to protest through fashion? Why not simply boycott the event?

In following various Globes threads online, I noted that several people wanted to know “what was wrong” with attendees, Tom Hanks and Hugh Jackman, because there was “no way” those two men could genuinely be that nice. Is that how Hollywood truly operates? That being nice is met with suspicion and a bid to dig for dirt?

Does this mean, then, that if Gary Oldman wins the Oscar for his performance as Winston Churchill in Darkest Hour – and, it certainly looks like it will turn out that way – that all of his previous misdemeanours will be re-hashed all over the press? 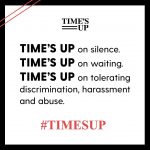 I’m not convinced that analysing every tiny detail of someone’s past is really what these #MeToo and #TimesUp movements should be about. By all means, call out the sex pests; the creeps; the unequal pay and any other circumstance that is morally wrong. I even wrote a piece on this site, denouncing the disgusting behaviour of Weinstein et al. But everyone has a past and it doesn’t take a genius to work out that most actors may not have behaved like saints at all times throughout their lives. From Oliver Reed’s boozy antics to Warren Beatty’s mile long list of lovers, this “behaviour” has been going on in Hollywood since it’s inception.

I’m glad that Hollywood has suddenly found its moral compass and is willing to stand up for what is right – but is raking everyone over the coals really the way to go about it? Even Meryl Streep has been subject to a smear campaign by a group claiming that she remained silent about Weinstein’s antics for years … Um, didn’t everyone? Isn’t that the point – that no one stood up? Liam Neeson was also slaughtered for daring to suggest that these hashtags are leading to witch hunts within the industry.

It will be interesting to see how both the BAFTAs and the Oscars unfold this year. I can only imagine that the atmosphere will be thick with tension. Any male recipient of an award may well feel guilty for achieving more than his female counterparts, or could fear having the finger of suspicion pointed at him.

Whether its going about it in the right way or not, Hollywood is changing. For starters, there will be a few more empty seats at their awards ceremonies.

One thought on “From #MeToo to #TimesUp – Where Are We Now?”