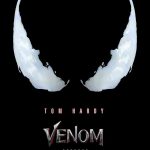 Tom Hardy is weaving seamlessly from his mumbling, masked DC villain, Bane, to take the lead in Sony’s Venom. In a not atypical move for Hardy, the character of Eddie Brock can be recognised as an anti-hero with a troubled past. Gaining his powers from a mysterious substance that Riz Ahmed’s Dr Carlton Drake is working on, Brock appears to be struggling with his new alter-ego.

The plot to the film is as-yet unknown. Director Ruben Fleischer is the man behind 2013’s Gangster Squad, however, so here’s hoping it isn’t another case of style over substance with Venom.

There are a lot of explosions; Tom Hardy daringly rides a motorcyle and wakes up frazzled and sweating in a hospital gown; there are lots of sweeping city shots. It really doesn’t give too much away – in fact, we see more of the back of Hardy’s head than anything else. There is a glimpse of what looks like a house uprooted and turned upside down and Michelle Williams looks set to do that sad, whispering thing she always does. But, really, Sony are holding their cards close to their chest on this one.

Either way, I am really excited to see Hardy’s realisation of the titular character.

Venom is set to be released in UK cinemas on October 5.