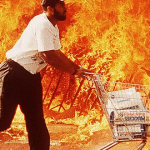 “We can put a man on the moon, but we can’t cure the sickness within our own cities.”

National Geographic’s powerful documentary, which premiered at the Tribeca Film Festival, begins and ends with this quote, from CBS News’ Bill Stout. It’s an incredibly evocative and thought-provoking documentary that is laced together from over one thousand hours of footage. Dealing with the days and events that rocked America in the early 1990s.

From April 29 until May 4, Los Angeles was in a state of national emergency. The city was burning; stores were being looted; people were being killed and seriously injured. Why? Because, on March 3, 1991, Rodney King was brutally beaten by four police officers who received no jail time. Because, on March 16, 1991, fifteen year old Latasha Harlins was shot in the head and killed by a Korean store-clerk, who also received no jail time for her crime.

The African American communities in South Central and beyond were tired of being the victims of grievous miscarriages of justice; of participating in a justice system that they believed was so blind, it couldn’t even see their suffering. And so, in response to the acquittal of both Soon Ja Du and the four officers involved in the King case, they decided to exercise their right to protest. But, what started as animated meetings in churches and public places soon developed into one of the worst cases of civilian unrest the US has ever seen.

LA 92 is a documentary that will leave your jaw on the floor for so many different reasons. The absolutely farcical nature of the King trial – coupled with the shocking death of the young Harlins – undoubtedly leaves your sympathies with a disillusioned and hurting Black community. However, the senseless violence and looting that follows will leave you equally angry.

The footage of Rodney King’s arrest and beating are incredibly difficult to watch; but equally so is the footage of a man being pulled from his truck, beaten to within an inch of his life and left with his genitals on display. The collection of archival video is nothing if not balanced.

The George H.W. Bush government are not portrayed in a sympathetic light; neither is Police Chief William Parker. The evidence of institutionalised racism utterly piles up and spills out the screen. If Parker can nonchalantly refer to African Americans as “monkeys in a zoo”, you can be sure that those opinions trickled down the ranks. 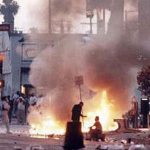 It took the likes of Congresswoman Maxine Waters – a complete powerhouse of a speaker – to step in and try to alleviate the situation; to encourage a ceasefire and a community clean up. The hurt and rage that swept through the Black community in LA nearly destroyed it – literally. Livelihoods were destroyed, bones were broken, arrests were made. It made several streets and neighbourhoods uninhabitable and complete “no go zones”. It was a time of great fear as well as outright anger.

Thankfully, the likes of Waters were able to demonstrate that razing a city to the ground wasn’t going to change the minds of those in power; if anything, it would only serve to underline their deep-rooted prejudices. The fact that an already disadvantaged group of society set about destroying their own neighbourhoods and dragging innocent passers by into a so-called “race war” gave anyone with racist tendencies the ability to say, “See, we told you they were animals.”

LA 92 is an incredibly hard-hitting piece of documentary film-making. There is no narration; just the occasional title card and facts presented as they unfolded. It’s untouched by historians or eyewitnesses or politicians; it simply is. The facts and footage that it presents don’t exactly require fanfare. The raw emotion on display is every bit as powerful and relevant now as it was back in 1992. It does not come down on one side or the other – it retells the events in sequence and leaves the viewer to draw their own conclusions.

The sad observation that the footage leaves you with, however, is we have seen echoes of so many of these scenes in more recent times within the likes of Ferguson, Charlotte, Milwaukee and Baltimore. Twenty five years on from LA 92, we still haven’t found the cure.

LA 92 is currently screening on Netflix.