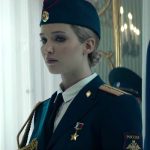 Subterfuge; sexual intrigue; brutal violence. On paper, Francis Lawrence’s Red Sparrow should be a really relevant and exciting piece of cinema. After all, the thought of modern day Russian operatives infiltrating major European cities and doing deals with the Americans isn’t too far from our current political climate. So why was it, then, so unbelievably boring?

A good, interesting film with well-thought out plot and credible characters is not one that leaves you wondering if a city break in Budapest is a good idea; where the set designers got a specific bureau from; and why you’ve never noticed how small Joel Edgerton’s hands are. Sadly, Red Sparrow is so devoid of anything or anyone worth bothering about, that you will find your mind drifting off into these silly minutiae.

The first forty five minutes or so seems to be a case of “How many times can we subject Jennifer Lawrence to attempted rape?” The press excitement of the leading lady shedding her clothes seems to be a desperate attempt to distract from the mediocrity of the film itself. Her character – Dominika – is a former Russian ballerina who is lured into the world of spies and secrets by her seedy, incestuous uncle Vanya (Matthias Schoenaerts). She’s sent to “Sparrow School”, wherein she must learn to cast aside her feelings and become a stoic Soviet, ready to spread her legs for the sake of cause and country.

Lawrence floats through the film like an extra from a Robert Palmer video, all heavy eyeshadow and pouty lips. She actually looks, at times, as if she is on wheels. No one truly walks like that, do they? Her crude Bond villain accent is patchy, at best. There is absolutely zero chemistry between her character and Joel Edgerton’s. Even their sex scene doesn’t make sense. She just jumps on him while he’s half asleep and he’s ready to go. Hmmm … 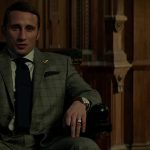 All of the characters seem incredibly two dimensional. Uncle Vanya feels like a snarling pantomime villain, with sly looks to the side and a barely concealed snarl. Charlotte Rampling, as the Sparrow Matron, sounds like she’s reading her lines off cue cards. Jeremy Irons, too, floats in and out of rooms in a plume of cigarette smoke.

The dialogue is quite terrible in certain places. At times, it certainly felt laughable as it was completely devoid of any sense of real speech. It’s a shame to see someone as talented as Edgerton deliver lines such as “Work with me and make these men pay,” or getting teary eyed over the fate of a woman he literally just met. Worse still, some of the plot has massive holes, with particular regard to how Edgerton and Lawrence first start talking.

Most of the reviews focus on the extreme violence that occurs throughout. In this “Me Too” era, it is a fairly bold choice to have your lead actress pummeled to the point of torture. The slow peeling of skin, the broken cheekbones, the drowning … They probably are the most tense scenes of the entire piece. The idea that these Cold War type tactics are still very much deployed in present day does make you shudder. At times, it does feel like there is a slight fetishisation of the naked and crying Lawrence but, in all honesty, her attempts at being “bold” and “seductive” – mainly the scene where she gets fully naked and leans over a table – just came across as gauche and tacky.

The way the plots all finally ties up is something that you can pretty much see coming a mile off. In a film that tries to be full of double crossing and secrets, it’s a shame that it ends up being so obvious.

Red Sparrow is supposed to be a steamy, sex spy thriller. If anything, it will leave you feeling cold.