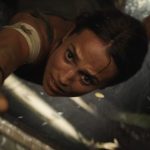 There are some things in life that you just instinctively know the answer to. The sky is blue, the grass is green, Ed Sheeran’s music is rubbish. But the big one that everyone knows of course is,  a movie adaptation of a video game is going to probably be, well… shite.

History tells us so. Super Mario Brothers, Resident Evil, Final Fantasy, Doom, Silent Hill, Assassins Creed, to name but a few. Great video games, not great movies. Now, a few will have the odd moment of fun ingenuity (Doom’s first person shooting scene) or merely turn out to be below average shlock rather than outright terrible (the first Silent Hill movie) but in the grand scheme, video game to movie adaptations aren’t considered the gold standard in film making.

So it’s a fairly low bar that’s been set, and the latest contender attempting to vault it is Tomb Raider, again. Yes back in the early noughties, Angelina Jolie took on the role of the series’ iconic lead, ‘Lara Croft’ in what turned out to be a fairly forgettable first film and an awful sequel that essentially killed any hopes of a franchise. Fast forward to 2018 and director Roar Uthaug has attempted a reboot, with new ‘Lara’ Alicia Vikander filling the famous cargo shorts.

The film is based on the 2013 video game reboot of the Tomb Raider series, which chronicles Lara as a younger woman just starting to find her feet on the path she’s chosen. You know, raiding tombs and that. The game is very good and was well received by fans and critics alike. However, I don’t think the film is going to enjoy the same plaudits. 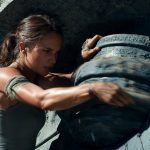 That’s not to say it’s bad. Alicia Vikander is a great fit for the role of a younger, headstrong,  more realistic ‘Lara Croft’. She’s likable and easy to relate to (I found Jolie’s interpretation to be cold and a bit smug). She brings an emotional, vulnerable side to the character that is quite refreshing. Plus ,she gives it everything in what is a physically demanding role and looks like she had fun doing so.

The rest of the cast are fine if a bit under-cooked development wise. Dominic West as Lara’s father; Walton Goggins as the nutty villain; Kristin Scott Thomas as Lara’s shifty guardian. They all put in a decent days work but they’re nothing spectacular. None of the cast, however, are helped by the clunky, exposition-heavy script. The sprinklings of tiresome cliches and cringey attempts at ‘cool’ banter between characters sticking out as awkward.

The film zips along at a decent pace, despite clocking in at two hours long. Unfortunately, for the majority of that screen time, it falls into the trap that many video game adaptations succumb to: it feels like you’re just watching someone else play the actual game. While this can still be somewhat enjoyable, it’s not really the full experience you were after.

That being said, thanks to the aforementioned low bar and Alicia Vikander’s energetic blast of fresh air in the lead role, makes Tomb Raider redux  easily the best video game to movie adaptation that has graced the silver screen. It might not be the greatest achievement in history, but it’s still an achievement dammit.