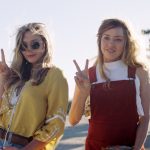 Ingrid Goes West is immensely satisfying for me to watch. It cleverly pokes fun at the artificial perfection of many social media personalities through the lens of a complete lunatic.

Said lunatic is Ingrid Thorburn (Aubrey Plaza), a shall-we-say troubled young woman who has a tendency to develop unhealthy attractions towards anyone who shows her the slightest bit of attention. After leaving court-mandated therapy, Ingrid comes across an Instagram “influencer” called Taylor Sloane (Elizabeth Olsen), who is the perfect summation of an unblemished internet celebrity. We watch as Ingrid attempts to infiltrate Taylor’s (apparently) flawless life whilst navigating her suspicious husband and friends.

Elizabeth Olsen, of Avengers fame, plays Taylor’s pretentiousness and naivety really well. You feel sorrow and contempt for her all at once. Plaza, meanwhile, delivers a funny, unhinged, and at times downright scary performance as Ingrid, letting us watch as the lies pile up around her to reach her impossible and mad goal.

A key message of the film is that no one’s perfect. Everyone has issues abound, festering beneath the impeccable surface. The audience is given the privilege of having some idea of how messed up Ingrid is. It gives a great insight into the mind of a stalker. The way she uses people, echoing a sane human almost perfectly, is hugely intimidating. O’Shea Jackson Jr. appears, for the first time since the multi-award winning Straight Outta Compton, as a sympathetic landlord with a Batman obsession. He’s the closest thing to a normal human being in the whole film, and you can only feel pity when he begins to get caught in Ingrid’s web.

The film is a commentary on the use of social media in the world of today. Most people just use it to connect but there is a growing number of users who are on there for business or lifestyle reasons. The number of messages everyone gets about boosting their followers is a testament to this. With the use of instagram here it is a comment on how Taylor curates her life and experiences in such a way to remove or mute the negative elements. What Ingrid fails to understand, or chooses not to acknowledge, is the difference between real life and the idealised version she is presented with from the colour filtered compositions that are trying to pass for real life.

One odd detail that struck me was how out of place the soundtrack feels. It sounds like a Disney movie. I’m assuming that this was a conscious decision to juxtapose the creepy deeds that Ingrid performs in her demented crusade, but it’s nonetheless strange to watch a sleep-deprived Aubrey Plaza steal a dog to a piece of music which would sound more fitting in a teen coming-of-age drama.

Ingrid Goes West will either entertain or baffle. An intricate knowledge of the Instagram celebrity world, combined with bleak comedy and fantastic performances adds up to some seriously satisfying filmmaking. Chances are you’ll dislike most of the central characters; which is exactly the grim, lurid point.