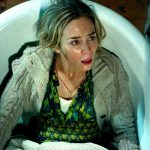 Make a sound, and you die. A simple premise for a horror film that will play on your basic fears and keep you on edge. While 2016’s Lights Out tapped into our primordial fear of the dark, here director John Krasinski will make you terrified to make a sound. It’s a fun premise which allows the filmmakers to get creative, although, there is a danger that pretension could take hold. Thankfully, you don’t have to worry about that happening.

The world as we know it is gone. It’s been over a year since cryptic monsters have appeared; their hunting patterns based on sound. Lee (Krasinski) and Evelyn (Emily Blunt) have fled to the countryside with their children Regan (Millicent Simmonds) and Marcus (Noah Jupe). Life isn’t perfect but they’ve managed to carve out a respectable existence for themselves, all things considering. Living in virtual silence, the family communicate using American Sign Language to avoid detection, but there’s only so quiet one can be and, with a heavily pregnant Evelyn due to give birth any day now, there are some sounds that can’t be avoided.

A Quiet Place is more than a mere gimmick movie. Krasinski utilises the silence to create a nerve shredding tension that permeates the entire movie, not allowing its premise to dominate at the expense of the story. This is tale of survival but also of family. Lee has to protect his household while dealing with a teenage daughter that feels estranged from her father. All told with little to no dialogue.

The fact that Regan is deaf allows for the family to know ALS without it raising plot hole eyebrows, and also adds credence as to why they’ve survived so long. Krasinski purposely cast a deaf actress in Simmonds, believing her own experiences would be beneficial to the authenticity of the movie. The character of Regan creates a wonderful dynamic, contrasting these creatures that hunt with sound against a would be victim that can’t hear.

The cast are brilliant, conveying emotion through expression, reacting with panic to the slightest sound which in turn keeps us clinging to the edge of the seat. The inclusion of a traditional film score, by Marco Beltrami, heightens the tension where it could so easily be distracting. As Krasinski explained previously, the music reminds audiences that this is a movie and not a “silence experiment”. Like all good horrors, a good score adds to the scares and it’s no different here. The silence is only effective if it has something to play off of.

It’s difficult not to be reminded of cult B-Movie Tremors, however, the tone of the two movies are entirely different. In a way, this could be viewed as a gritty reboot of the fun monster movie; as entertaining as A Quiet Place is, it’s not a comical yarn. The dangers are not funny and the threat is crafted to instil terror, and is successful in doing do.

An early contender for horror of the year, A Quiet Place doesn’t overstay its welcome and will remain in your thoughts long after the credits have rolled.