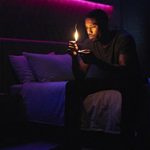 Francois Truffaut’s 1966 version of Raymond Bradbury’s sci-fi novel, Farenheit 451, is something of a cult classic. Julie Christie and Oscar Werner brought to life a dystopian future full of oppression and symbolic book burning. HBO have today launched the trailer for their TV movie remake, directed by Ramin Bahrani.

Starring Michael B. Jordan as Guy Montag, the reboot tells the story of a fireman tasked with burning a city’s books, only to have his head turned by the rebellious Clarisse (Sofia Boutella). Michael Shannon looks set to put in another powerful performance as he stars as the conflicting Beatty, the Chief Fireman who seems to know an awful lot more than he should about the books he is burning so fervently …

The trailer combines the black uniforms and jackboots of Fascism that we are used to, with steam punk landscapes and a pulsating soundtrack. The future is full of promising tech, and yet the rows and piles of books seem so old-fashioned in contrast. Guy lives in a “smart home” and his life – like the rest of the population’s – is heavily regulated by mysterious pharmaceuticals. Guy tells a classroom of children that, by the time he is finished, “there won’t be one book left”, but soon, his eyes linger over a copy of Franz Kafka’s Metamorphosis, reading the line “Is it possible for a man to be guilty?” whilst undergoing his own change of opinion.

This remake – whilst it won’t grace our local multiplexes – seems well-paced, well cast and true to the spirit of the text. It should make for an interesting watch.