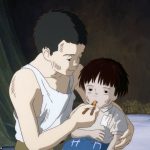 Anyone who thinks that anime is simply full of wide-eyed, giggling young girls and over-the-top fantasy sequences clearly hasn’t seen the raw and unflinching Grave of the Fireflies. Film 4 have been screening many of Studio Ghibli’s biggest and best this month, so it seemed an ideal time to watch the late 80s classic that regularly tops lists of best anime and – more pointedly – best war films.

There aren’t really too many films about World War Two from the Japanese point of view – at least, none in the mainstream cinematic discussion. Perhaps that is because of their alliance with the Nazis or their treatment of British and American POWs. Or maybe it’s because no one wants to think about the one and only time an atomic bomb has been dropped on civilians.

The film is a semi- autobiographical account of writer Akiyuki Nosaka’s personal experiences. World War Two is grinding slowly to an end in Grave of the Fireflies, but the consequences of having survived are as severe as the injuries of those who have perished. Thin, wooden houses in crowded streets are no match for the regular firestorms raining down from US aircraft. The constant threat of the air raid sirens – the low, wailing noise that permeates the film – leaves the characters at the heart of the film on edge. Rationing is rife; the black market brimming with family heirlooms and desperation.

Siblings Seita (Tsutomo Tatsumi) and Setsuko (Ayano Shiraishi), are forced to fend for themselves. Their father, in the navy, hasn’t written home for a significant length of time and their mother is fatally injured in a bombing raid. Selfishness and brutality emerge from all the adults around them as the grim reality of post-war Japan creeps in. Equally, their child like qualities disappear. Setsuko’s piercing, hungry cries parallel the air raid sirens. 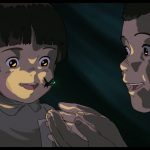 This is more than just a “cartoon” – this is a story of survival; of a family torn apart by war. Living in a cave, Seita is forced to hunt and steal in order to feed his sister – who is beginning to show extreme symptoms of malnourishment. It is, at times, an incredibly hard watch. Steely greys, murky browns and inky blues flood the screen. There is no joy; no hope. The only small relief that Seita can offer his sister is the appearance of the flowing green fireflies at night – a simple distraction from the gravity of their situation. The themes of guilt, responsibility, anger and futility are scorched through the film like the ruined streets of Japan.

Studio Ghibli have created a portrait of war so raw and unrelenting; it’s an incredibly difficult and emotional thing to watch. The plight of two starving children, so uncertain of their place in the world and what their future holds, unguided by parents or loved ones, is drawn and captured in such a poignant and intimate manner. It’s easy to forget that there aren’t “real people” on screen because the animation and the performances completely draw you in.

Michio Mamiya’s sonorous and searing score accentuates the sense of loss and uncertainty throughout. The film packs so much intensity into the 89 minute run time, without ever coming across as saccharine. In Grave of the Fireflies, life is hard – and it wants you to feel every last trauma.

An incredibly beautiful and moving portrait of life in the shadow of war, etched out on the lost innocence of two struggling siblings.