It is easily one of the most eagerly anticipate cinematic “events” of the decade. Marvel has been working towards this endgame since 2008, introducing and re-introducing its plethora of superheroes, antiheroes and villains. It has woven characters and storylines through back stories, sequels and crossovers. Most recently, the release of Black Panther has seen levels of hysteria that most film studios could only dream of. So, was it worth the wait; the hype; the anticipation? Did Avengers: Infinity War live up to the expectations placed upon it?

In short, absolutely. As soon as the opening bars of Alan Silvestri’s Avengers theme echoed through the cinema, you could feel both sense of excitement and, to a certain extent, sadness that it is all coming to an end. The Marvel Universe has taken its time – literally, a decade – crafting their various characters into credible and, yeah, at times, relatable people. We have gotten to know Steve Rodgers earnest sense of duty; Tony Stark’s sarcastic eye rolls; Bruce Banner’s conflicting relationship with his rampaging alter-ego. And whilst the use of the word “infinity” in the title alludes to the colossal set pieces that Marvel have also excelled at, the film definitely has a more intimate, connected feel. Essentially, it’s not just another popcorn blockbuster. It’s all that and a little bit more.

As the trailers suggested, Thanos (Josh Brolin) is gathering up the six infinity stones that would give him the power to wipe out half of the population in the galaxy. As well as being a massive purple megalomaniac, he reasons that, if the Earth weren’t so full of people, the resources would be shared more equally and there wouldn’t be as much hunger or war. Except, in order to collect all six stones, he himself has started the war to end all wars. Irony, huh?

The film delivers on everything it promised it would; the shock deaths, the action, the humour. It’s rare to be watching a film where the audience are frequently both erupting with laughter and gasping in shock and awe. Tom Holland continues to nail the realisation of Spiderman, with his wholesome desire to help. We see a slightly softer side to Tony Stark (Robert Downey Jr) and – like Pele and Pfizer warned us – Bruce Banner (Mark Ruffalo) is struggling to get his Hulk out and keep him out. Groot (Vin Diesel) has become a sulky teenager and the pissing contest between Thor (Chris Hemsworth) and Starlord (Chris Pratt) is hysterical, particularly when the latter attempts to copy Thor’s silky vocals. 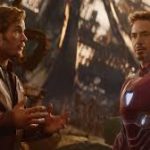 For me, that’s where the Marvel films have always stood out. Their characterisation is impeccable. As much as the city-wrecking, explosion-ridden battle scenes are what most cinema-goers part with their cash for, the more intimate scenes between the characters where there is a bit of banter have always been my personal preference. Infinity War, thankfully, delivers on both. Brolin’s Thanos is a hulking great brute of a villain, showing absolutely no mercy as he rips his way through various planets. I’m not a great lover of CGI villains, but there is enough of Brolin’s own expressions in there to make it credible. There’s also an interesting family dynamic to his character that allows him to more than a two-dimensional plot point.

The bringing together of all the different franchises is actually very well executed. If I’m being honest, I had feared a mess of poorly thought out introductions or tenuous links. However, the way all of the various characters meet seems incredibly natural and feasible and – most importantly – the way they fight together to defend the universe is utterly captivating as their skills and powers weave together to create the best defence they can offer. The characterisation of each hero – which has been so carefully crafted by various directors such as Taika Waititi and James Gunn – isn’t lost amongst the Russo Brothers vision.

The ending may be problematic for some Marvel lovers as it does happen rather abruptly. You know the drill by now, you stay after the credits to find out more, but after all the bloodshed and good old-fashioned teamwork, it does seem to end a little more swiftly than I had anticipated. Most of the 2.5 hour run time is, naturally, dedicated to the set up of the final show down. However, the post-credit sequence did cause a lot of whoops and gasps in the cinema.

So, thank you, Marvel for the past decade. It’s been a blast – and Infinity War was definitely a fitting showdown.