An American president convinced the media has an agenda against him and his decisions; damning White House documents covered up; journalists threatened for printing the truth. You would think, in our “fake news” era, that Steven Spielberg was directing a drama about the current US administration. But his latest Oscar nominated effort, The Post, is actually about another particularly vocal president – Nixon.

Set near the end of the seemingly endless slog that was the Vietnam War, the film harks back to a golden age of newspapers, where groundbreaking journalism really did have the power to change the status quo. And, as if to bolster the importance of print media, Spielberg drafts in cinema heavyweights Meryl Streep and Tom Hanks to lead his cast to ethical victory.

At the heart of The Post is the Pentagon Papers scandal, wherein leaked documents essentially proved that the various American administrations over the past twenty years, knew that Vietnam was an unwinnable war, and yet kept sending troops and reporting alleged victories. So far, so tricky.

Running parallel to this is the story of the newspaper’s first female owner, Katharine ‘Kay’ Graham (Streep) and her struggles to be taken seriously in a male dominated industry. She’s a bit of an underdog who – thanks to her father and husband – has never had to have a job or make a business critical decision. Streep plays the role to perfection, starting off stuttering, tearful and vulnerable before working her way towards finding her feet and – more importantly – her voice.

Tom Hanks leads the news team as the famous editor, Ben Bradlee, who is determined as ever to expose the rancid corruption that has infiltrated Pennsylvania Avenue for decades. Who better to play courage in their convictions than the ever-dependable, utterly credible Hanks? The man positively beams honesty and authority. 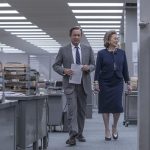 Bruce Greenwood makes for a particularly odious Robert McNamara. Bob Odenkirk, Sarah Paulson and Matthew Rhys head up an excellent supporting cast. Truly, there are no bad performance here – even if, at times, the script is a little jumbled and gives way to lengthy conversations where characters talk over each other.

The film is paced neatly as the two main storylines weave in and out of each other, helped along by John Williams’ excellent score. Writer Josh Singer has also worked on the equally brilliant Spotlight and various seasons of The West Wing and this is evident in the swift way that the plot progresses, as you follow the leads alongside the journalists.

It’s exciting to watch the news team compile their articles and travel all over the country to track down facts. You can almost smell the cheap coffee and cigarettes on the news floor as the typewriters and telephones punctuate the action. It’s a battle to tell the truth as much as it’s a race to save the paper from losing out to bigger publications, such as The New York Times.

Like any film about recent history, most viewers will know the outcome, but that doesn’t take away from the quality of The Post. It makes an excellent precursor to the brilliant All The President’s Men, with the final scenes quite literally giving way to Nixon’s next presidential scandal, Watergate.

A thoroughly interesting drama with excellent central performances, The Post is a timely reminder of the power of good journalism and the need for freedom of the press.