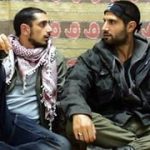 Comedy is not only subjective, it’s often a product of time. Humour ages quickly, even something that seems as harmless as Friends has fallen foul of the social media Witchfinder Generals as new audiences find fresh grievances in older works.

Then, there’s the purveyors of comedy who have just never really given much of a care, as to your feelings. Chris Morris was causing outrage in the 90s with satire so scathing that his Brasseye special on paedophilia became one of the most complained about programmes on TV. He released his feature length debut, Four Lions, in 2010 with a synopsis that left mouths agape before a trailer was even released could Morris make terrorism funny, and even more so, what impact does it have eight years later?

Omar (Riz Ahmed) is the leader of a group of radicalised British Muslims intent on making a mark on Western society. He’s joined by his simple cousin Waj (Kayvan Novak), naïve Faisal (Adeel Akhtar) and white convert to Islam Barry (Nigel Lindsay). The group aren’t the most organised Jihadists, unable to agree on much such as what their target should be. Barry’s idea to take out the local mosque highlights the (lack of) thought process amongst the men.

Four Lions has not only aged well, it’s arguably more important with each passing year.Morris focuses on the human element of Omar, a highly likeable character despite the atrocity he’s planning. He’s a family man, a husband and a father. A devout Muslim yes, but he’s also a product of his environment as he mocks his brother in law for his traditional religious values.

The humour is shocking, challenging and incredibly funny. Morris, along with writers Jesse Armstrong and Sam Bain, make light of serious subjects without treating the subject matter with frivolity and disrespect. The excellent cast are vital to making the script work, with all but Lindsay’s Barry coming across as amiable. He is the obvious standout due to his race but more so for his attitude, a thinly veiled swipe at Western society’s attempt to understand something it doesn’t understand. By the end, it’s questionable if any of the men understand what they’re examination willing to die for, a poignant statement.

Often hilarious, Four Lions has a huge heart and is even sweet. Such moments are spoilers but it’s difficult not to get emotionally involved in Waj’s journey and Omar’s feelings for his cousin. The third act doesn’t slow down by any means, emphasising this bond while controversially commenting on how these attacks are dealt with.

There is nothing subtle in the movie, it’s not Morris’s style and Four Lions wouldn’t work any other way. It’s in your face, provocative and brash – whilst not judging you for laughing along. Well executed in its delivery, don’t be fooled with its sombre ending ,as it perhaps leaves the most outrageous laughs for last. Social media might tear it apart in 2018 but there’s no denying that this is a movie that will never not be funny.