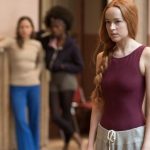 Giallo director Dario Argento’s cult 1977 horror, Suspiria, is getting a remake, courtesy of Call Me By Your Name director, Luca Guadagnino. Starring Tilda Swinton and Dakota Johnson, the first look at the film is absolutely dripping in tension; a true nightmare become reality.

Whilst the trailer doesn’t allude to the plot whatsoever – it’s more a series of striking and unsettling shots – the film is centred around Susie Bannion (Johnson), who joins a prestigious German ballet academy, only to realise something far more sinister is lurking at the heart of the school.

It’s great to have a teaser that doesn’t give away the entire story in two minutes. Instead, Suspiria alludes to a style of horror that will leave the back of your throat in knots throughout. It positively swirls in overwhelming fear.

Argento’s original film – which he helped to score – is famous for its stunning cinematography and finding beauty in the grotesque. Given the series of fierce looks, dripping blood and raised weapons, accompanied by heart-thudding brass, it looks like Guadagnino will equal his predecessor’s obsession with perfectly framed horror.

Suspiria is set to appear in UK cinemas towards the end of this year.