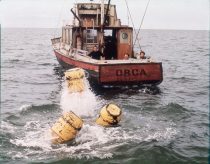 In 1975 a movie was released that terrified audiences from going into the water. Much has been said how it killed the tourist trade of some beach towns and demonised the shark so much that we saw an increase in hunting. Its legacy is unquestionable. The film is timeless. Adapted by Peter Benchley from his own novel (with Carl Gotlieb) and directed by Steven Spielberg, Jaws is credited as being the prototypical summer blockbuster movie. It was the highest grossing film of all time until Spielberg’s pal George Lucas released Star Wars two years later.

Set in the fictional resort town of Amity Island, the residents are gearing up for their big Fourth of July weekend which will bring tourists and revenue. Amity relies on this income in the summer months so it’s with much dismay that police chief Martin Brody (Roy Scheider) wants to close the beaches after a young woman who fell victim to a shark washes up on the shore. Mayor Larry Vaughan (Murray Hamilton) overrules him, sceptical of there even being a shark, putting profits over safety and orders the beaches to remain open. But there is something in the water, and it’s hungry.

Jaws is an undisputed classic that is sublime in everything from the performances of the cast to the execution of the movie. While a simple story on paper, Spielberg injects the movie with unbearable tension that had audiences gripped to their arm chairs and on the edge of their seats. John Williams’ epic score is synonymous in pop culture, instantly recognisable and fills you with dread from the first two notes.

There are many elements of the horror and thriller genres that are woven in the film’s fabric as much as Spielberg wants to keep audiences in suspense he also does a good job at scaring them. It’s incredible to think that Jaws has a PG rating considering how violent, gory and shocking it can be. The blood doesn’t flow often but when it does, the water turns red.

As a thriller, we have Brody and shark expert Matt Hooper (Richard Dreyfuss) attempt to find evidence of the shark to present to the Mayor. What director and writers seamlessly achieve is the switch to horror when they see fit as the suspense turns to dread and fear drips from the screen. If you’re worried about falling off the edge of your seat, you’ll be sure to jump back into it.

Jaws isn’t a run of the mill monster movie. What elevates it is not just the skills behind the camera but the talent in front of it. Schneider is in excellent form as the weathered police chief. Not native to the island, he spends his days dealing with petty crimes and doesn’t seem overly excited about embarking on an adventure. Still, he’s brave and bound by duty, unable to rest until the shark is vanquished. Dreyfuss provides some sardonic comedy with his quips while Robert Shaw’s shark hunter Quint looks set to steal each scene he is in. The trio have an incredible chemistry that often sees them at odds, especially when they’re cooped up on a small boat, miles from land.

When the three men team up and head out to open water, Spielberg positions the boat wonderfully as we see it sail through the frame of a shark’s jaw, skinned and hanging like a trophy in Quint’s abode. There’s some tasteless humour in the shot yet it’ll provide a knowing smile rather than an eye rolling groan.

The shark itself has dated in the 40+ years since it’s breakthrough role but what is notable and exceptional is that they built a large mechanical shark that would work in water. The production was not without its difficulties and although the shark might look a little rubbery at times, it doesn’t deflect from how fearsome its presence is. This is a physical adversary for our heroes to combat, not one that’s been digitally added in post.

The film spawned three sequels, good (Jaws 2), the bad (Jaws 3) and the “what the hell were they thinking?” (Jaws the Revenge). It’s Jaws though that has endured for over four decades, often lurking in the lists of Top 5 films ever made. It horrified audiences then and continues to do so now. The shark may look fake but chances are you’ll still think twice about going for a dip after watching.