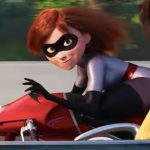 Fourteen years is a long wait for a sequel – especially a superhero one. Since 2004’s The Incredibles, we’ve had two big screen incarnations of both Batman and Superman, three actors play Spider-Man, and ninetten films from Marvel Studios from the dawn of the MCU to Infinity War. Brad Bird often spoke about a desire to continue the adventures of the Parr family, yet with the game changing so drastically, he found it difficult to write a follow-up that wouldn’t just be another superhero film in an already bloated genre. Was it worth the wait? Of course it was.

The movie picks up where the last film ended as the Parrs, Bob (Craig T. Nelson), Helen (Holly Hunter), Violet (Sarah Vowell) Dash (Huck Milner) and Jack-Jack (Eli Fucile) do battle with the Underminer (John Ratzenberger). Despite being victorious, the authorities are dismayed at the destruction left in their wake. Superheroes are, once again, made illegal, forcing the Parrs to adhere to their secret identities forever. As the family struggle with monotony, tycoon and massive superhero fan Winston Deaver (Bob Odenkirk) offers Helen to dust off her Elastigirl suit while Bob faces his biggest challenge yet – being a stay at home dad.

What distinguishes The Incredibles 2 from other superhero movies is its approach to story. This is a family driven movie that features superheroes; the emphasis here is firmly on family. Watching Mr. Incredible juggle three children is hilarious and gently pokes fun at dads everywhere as the seemingly “easy” task of the mother proves to be anything but. The understated performance of Vowell as the hormonal Violet is a delight as she cries over a boy and gorges on ice cream while invisible. The family troubles are clichéd but all so familiar and, as a result, very amusing.

It’s not all laughs, though, with The Incredibles 2 producing some enormous set pieces as Elastigirl takes on new nemesis, the Screenslaver. The animation, as to be expected, is sublime with dramatic action that drives the plot forward with exciting spectacle. The animators aren’t limited by the usual budget restraints but this doesn’t give Bird license to go OTT with pomposity. It’s a treat for the eyes and will keep you hooked.

Although it isn’t as good as the original, The Incredibles 2 is a worthy sequel full of heart and produced by filmmakers that care for their characters. The cast are on top form and appear to be having as much fun in their roles as you’ll have watching them. The door has been left open for a third entry, hopefully it won’t be another 14 years before we’re treated to that. As is tradition with Pixar, a short film precedes the feature with Domee Shi’s Bao. Make sure you bring the hankies for that one.