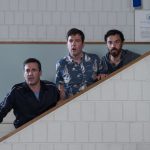 “We don’t stop playing because we grow old, we grow old because we stop playing.” This George Bernard Shaw quote is wrongly attributed to Benjamin Franklin throughout the true story of Tag; the light-hearted comedy that reveals the story behind Russell Adams’ 2013 Wall Street Journal article about a group of middle-aged friends who met up every May to continue the giant game of tag that they had been playing since their school days.

But this isn’t just any game of tag – this is a cross-country effort with hugely elaborate set ups, disguises and traps. It’s not so much a childhood game as full-on warfare, complete with surprise attacks. And yes, this is middle-aged men with wives and jobs and PhDs doing this. It’s a kind of schmaltzy screwball comedy with plenty of physicality as Hoagie (Ed Helms), Bob (Jon Hamm), Sable (Hannibal Buress) and Chilli (Jake Johnson) go all out to finally “get” the never-been-tagged, all-time champion, Jerry (Jeremy Renner).

Whilst not over long – the film has a 100 minute run-time – I can’t help but feel that Tag would have probably been better suited as a made-for-TV special. None of the performances are particularly inspiring – despite a solid cast – and the film quickly becomes a bit saccharine. I don’t think the spirit behind the game has translated particularly well to the big screen.

The romantic relationships of these men are throwaway plot points that – whilst probably true to life – really ground the fun and silliness of the main story to a halt. In short, all of the characters feel incredibly two-dimensional and you really can’t get invested in them, despite knowing that all of this madcap behaviour is based on real events. You also can’t really gloss over the fact that these four men don’t look like they were in the same year at school together.

What is good fun, however, are the attempts to tag Jerry. Although they seem utterly fantastical (dressing up as an old woman; wild chases in golf buggies; breaking into houses) they did actually happen in real life, as the pre-credits sequence shows. It’s also pretty clever the way Jerry assesses each potential onslaught – reminiscent of Guy Ritchie’s Sherlock Holmes films – in order to avoid being “it”. 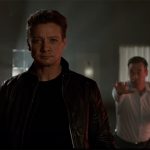 I think the issue with Tag is that it’s just distinctly average. There’s nothing overly hysterical about it, although the slapstick humour tries really hard, and they simply brush over the more serious points about these men and their lives (or turn them into a saccharine plot point). Even the slow-motion set ups before each attempted game become a little tired. There’s only so many times you can see Ed Helms’ rubber-like facial expressions before they stop being funny. The final act feels like really weird, tonally-jarring – like it’s been stuck on as an afterthought.

The initial laughs (which are fairly regular in the first fifteen minutes) soon become thin on the ground. Lou the Bartender’s (Steve Berg) desperate attempts to join the tag gang grate very early on. And some things – such as miscarriage – are really not suitable punchline material. The post-credits sequence raises a bit more of a laugh (let’s just say it’s rather musical) but by then the film is over and you’re left feeling short changed.

It seems like the script is the biggest let down here, with poor character development and a rather bizarre last fifteen minutes. Some of the jokes completely fall flat, too, and the female stereotypes (the bridezilla and the mysterious high school romance) are really staid.

Here’s hoping these four fellas don’t decide to reunite for another game next year.