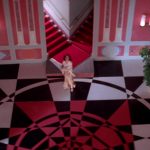 Decadent. It’s not a word you would typically associate with the horror genre. Yet, that’s exactly what Dario Argento’s 1977 cult classic, Suspiria feels like. And, with a remake set to hit screens later this year, it seems timely to revisit the Giallo favourite.

Everything about the film seems designed to disorientate. From the lurid geometry of the sets to the startling colour palette, it’s a film that straps you in from the outset and keeps the twists and turns coming. Argento sets the tone with a grisly murder – and a close up of a barely beating heart being stabbed – and uses that scene as a benchmark for tension throughout the rest of the film.

American ballet dancer, Suzy Bannion (Jessica Harper) joins a prestigious European dance school, only to realise that a number of students have vanished mysteriously – and there is a lot more to the headmistress than dance bars and choreography. She is the ultimate Giallo stereotype of the “outsider” – a young female tourist on the trail of something wicked.

Argento creates an entirely surreal viewing experience – almost as if you have stepped into an Escher painting – with seemingly endless blood red corridors; rain so thick you can hardly see; interlocking rooms and clipped, sharp text. It seems, at times, like everyone is talking in subtext. And Suzy might not necessarily be a reliable narrator – could these swirling colours and haunted dance halls be her own paranoia? 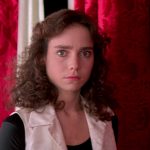 And that isn’t a bad thing. From start to finish, Suspiria is incredibly dream-like (or should that be nightmarish?) in its cinematography. Italian prog-rock band, Goblin, provide a score that wouldn’t seem out of place in a tinkling Gothic fairytale. It all furthers the sense that what you are watching may or may not be real. Is Suzy going to wake up and realise she had fallen asleep on her flight to Europe?

The film is so sensationalist and over the top that even the most basic of tasks – such as going to sleep – feel fraught with danger and suspense. So, despite the fact that the film itself doesn’t feel real, the danger absolutely does.

Like balletic choreography, everything about the film is elaborate, including the final act. Although the stylistic excesses feel like they can go no further, Argento subjects the viewer to an almost mischievous wickedness. You can practically sense the glint in his eye as he heaps yet more horror and trauma on.

Yet, as a viewer, you are never allowed to get lost in the lavishness of the production. There is a very tangible sense of terror pervading the film that constantly reminds you not to get too caught up in the pretty colours and Baroque-style score.

As an introduction to Giallo, you can’t go wrong with Suspiria, it’s an absolute masterclass in the opulence of horror. It will be incredibly interesting to see what Argento’s compatriot, Luca Guadagnino, achieves with his remake.