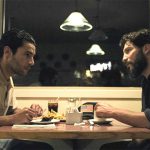 An after-hours card game in a sleepy Alaskan bar. The light, tinged a grey-yellow, alludes to film noir. A mysterious, taciturn stranger asks for some food and water. All of a sudden, the place becomes the scene of a triple murder.

That’s how director Jamie M. Daag opens up Sweet Virginia, the story of a small town with plenty of drama lurking underneath its tumbleweed veneer. It’s an incredibly slow burn. At times, it feels like Fargo meets Nightcrawler; complicated human relationships meets remote setting meets extreme violence. Essentially, everyone in this secluded town is lying – to themselves or each other.

The film is, undoubtedly, held together by the two leading males, Jon Bernthal and Christopher Abbott. Abbot stars as Elwood, a contract killer hired to perform a hit on Mitchell McCabe, as a result of his persistent infidelity to his wife, Lila (played with absolutely no emotion whatsoever by Imogen Poots). He is a very conflicting character. On the one hand, he seems like a poor soul, stammering and stuttering his way through life, battling a poor upbringing and a strained relationship with his mother. At the same time, he’s not exactly gun-shy.

Washing up at the Sweet Virginia motel, run by former rodeo rider Sam (Bernthal), he embarks upon a series of unsavoury exploits in order to secure payment for his services. Bernthal’s Sam is an equally interesting character. Battling the onset of Parkinson’s, he seems a shy and wounded individual who never really reveals his true self.

The scenes between the two men – particularly the one in the diner, which is lit like Edward Hopper’s Nighthawks – are absolutely fraught with tension. The dialogue is minimal, so the danger comes from what is unsaid; or eyes darting across the room. It’s like watching animals sniff each other out. 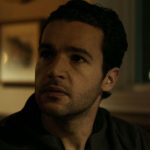 That, unfortunately, is as good as it gets with Sweet Virginia and it’s a real shame to see two genuine acting talents wasted. There is an awful lot of “filler” – shots of rolling hills, stretches of highway, rows of houses – despite the film’s relatively short 90 minute run time. And the initial promise of a noir thriller is quickly dissipated by a terrible, monotone performance from Poots and a desperate, underwhelming turn from Rosemarie DeWitt.

The plot also meanders and fumbles its way through to conclusion, making it feel like a different film from the opening sequence. It seems so desperate to get to the end of the run time it throws everything at you in the last fifteen minutes or so. Attempts at twists can be seen a mile off and are made even less convincing by the supporting cast.

The cinematography is quite good – the grimy wash that everything is given is aesthetically pleasing – however, the soundtrack is a let down. Whilst it’s not terrible to listen to and doesn’t impede on the dialogue, it overpromises on the film’s behalf. Sonorous bass notes and spiraling violins bear almost no correlation to the unfolding action.

Sweet Virginia does have pockets of good cinema and intriguing performances. Sadly, it doesn’t manage to maintain the slick dialogue and appeal of a classic noir as the plot begins to unravel and it all starts to feel rushed and chaotic.

Jon Bernthal and Christopher Abbot are, definitely, the best thing about the film. And, despite its flaws, it is still worth a watch.