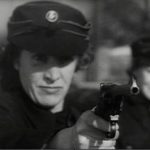 “What if …” It’s a tantalising prospect for both novelists and film makers alike. It allows creative freedom; a world imagined on the quirk of a historical event, a simple redirection of fact. It’s particularly prominent in the science fiction genre, where entire universes and their accompanying technologies are brought to life through supposition.

But what about the past? What if things hadn’t turned out the way that they have? What would our lives look like now? Our homes; our jobs; our families?

That is what the 1964 British drama, It Happened Here, explores. Feeling more like a gritty docudrama than a work of pure fiction, it dares to imagine what life would be like if Germany had conquered Britain during World War Two. It’s a particularly nightmarish vision; often times it feels like you are watching old newsreel footage, adding to the sense of reality presented on screen.

The film has, naturally, evoked comparisons with the novels The Man in High Castle (subsequently adapted by Amazon) and It Can’t Happen Here, as well as Roberto Rossellini’s 1945 neo-realist opus, Roma, Citta Aperta. This is even more of an achievement when you consider that the directors, Kevin Brownlow and Andrew Mollo, were a mere 18 and 16 at the time.

Pauline Murray’s performance – as a staff nurse of the same name – is more understated than the great Anna Magnani’s, but is no less powerful or provocative. A single sideways glance or pursed lip is enough to tell the audience more than pages of script ever could. Her clipped English accent – with a hint of soft Irish vowels – is the poised and perfect antithesis of the spiraling violence and chaos around her.

The film opens with a massacre; village people being lined up and shot into open graves – imagery of Fascism we are all to familiar with. Determined to remain apolitical, despite the circumstances, Pauline is forced to travel to London in order to secure work and food. But it is not the bustling capital either she or we as viewers have come to know. 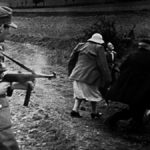 German soldiers goose step past Big Ben and take pictures on the steps of the National Gallery. The homeless and hungry line the streets whilst stern looking “Work for Germany” posters are pasted on to walls. The residue of war is everywhere; buildings are mere shells and the presence of the occupier is more than felt as statues of Goethe and Schiller begin to make their mark on the landscape.

To continue working as a staff nurse, Pauline is forced to join the IA (or Instant Action), a Fascist organisation that “sounds like a laxative”. Having arrived in London weary, hungry and poorly clothed, she quickly finds herself in a smart black uniform, with plenty of rations and shiny shoes. Is she being seduced by the comforts offered within party life? There is only one single scene that hints at this – when she admires her new shoes on a public bus, only to make eye contact with a shabbily dressed woman sitting opposite. Her sense of shame is overwhelming.

However, the scene that caused the most controversy on the film’s release was that of a Fascist meeting, held in an officer’s mess hall. Brownlow and Mollo chose to use real members of the British National Socialist Movement and allowed them to air their views on issues such as race, politics and euthanasia. The BBFC – horrified at the unscripted discussion that made the final cut – ordered the scene to be removed. It has since reappeared; the shock impact is clear.

Watching these men snarl their way through rants about Jewish people and Bolsheviks; insisting that disabled children ought to be killed; shouting about international conspiracies … Their ignorance would be laughable if it weren’t so dangerous. The fact that these are not actors, these are real men who genuinely hold such beliefs, adds yet another layer of fear to the film.

This isn’t the only horror the film pours on its viewers, as Pauline is sent to a small village hospital keen on exercising the racial theory of eugenics on unsuspecting Polish patients. The succession of sing-song voices – from twee, elderly nurses to erudite doctors – explaining away their vile behaviour is deeply unsettling.

It Happened Here is an excellent film, imagined in such a way that you could believe it was “found footage”. It raises many questions about the concepts of collaboration and resistance. A remarkable feat of cinema and an incredibly troubling reminder as to the consequences of war and extremist views.