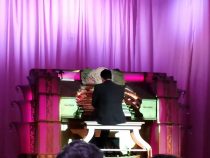 Once again as part of the Glasgow Open Doors day the Pollokshaws Burgh Hall once again opened itself up to the public for a tour and a very special cinematic performance. The Hall is home to a rather splendid Wurlitzer organ and is in use regularly with performances and in this case a movie screening. It makes a quite stunning sound and really needs to be seen and heard to be believed. This year, the cinematic attraction was three short films featuring the much-loved comedy duo, Laurel and Hardy. As well as a crowd puller it’s even more relevant with the forthcoming Stan & Ollie debuting as the closing film of the London Film Festival.

Prior to the first short the lights dimmed in the hall and we were treated to fifteen minutes of tunes on the organ. The tunes ranged from film related pieces and a few very well-known tunes. With the organ lit up in it’s every changing array of colours and the surprising variety of sounds coming from behind the audience in the gallery at he back of the hall it made for a good start to the proceedings. Once finished the screen came down and it was time for the films to begin.

The first film was the twenty-minute short Dirty Work, from 1934. Here the duo are chimney sweeps who have called into the house of a mad professor type who is working on the formula for reversing the ageing process. The comedy, as with most of their output, comes from miscommunication and prat falls. They make it look so effortless that you tend to forget just how much physical effort goes into it. There is a fantastic scene where Ollie is sitting in the fireplace having fallen down the chimney. As he look forlornly at the camera bricks topple down on him. The timing of each smack of the head is judged perfectly to gain the maximum comic effect and the pay off with a final brick hitting him after an extended period of calm.

The second film was the silent short Double Whoopee. A comedy of errors see the boys firstly mistaken as a foreign Prince and Prime Minister visiting a top hotel when in fact they are the new doorman and bell boy. With this one it is the repetition of actions that makes for the comedy. When a joke works once it is good, when the repeat ramps up the humour it’s obviously a winning formula. Double Whoopee is notable for one of the first credited appearances from screen siren Jean Harlow. She is only on screen for a couple of minutes in a minor role but there is still a glimpse of the star in the making. With this being a silent film organist Aaron Hawthorne was free to provide a suitable accompaniment. Using the familiar Laurel & Hardy theme tune as the basis for the music he used the full range of the organ’s capabilities, including percussion and sound effects, to accent the on screen action. Brought together it was a real treat.

Finishing off the programme was The Music Box. This is arguably their best known short film. The Laurel & Hardy moving company have a real job on their hands. The have to deliver a player piano to a client and the only way to the house is via a steep set of very unforgiving stairs. Of course moving the piano is fraught with pain and suffering and that is just the start of their problems. Stan and Ollie are at the height of their fame at this point and their double act was honed to perfection. The screenplay and the action are tight with the laugh ratio is as high as you can reasonably expect.

The screening was pretty much full which is a testament to the power of cinema. People want to see this kind of thing on the big screen. The rise of community cinema groups, especially in cities like Glasgow are starting to make this happen. There are a lot of passionate people out there who really deserve the support of the public. It isn’t hard to find out what’s going on . A simple google search is a good start. Go on, you know you want to.