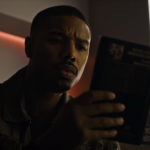 For those of you who have lost their Sunday nights to the Hulu series, The Handmaid’s Tale, you’ll know how incredibly powerful and resonant the image of a dystopian American culture can be. Based on Margaret Atwood’s novel, it updated certain elements of the original text – whilst retaining the message and spirit at its core – in order to present a terrifying vision of gender persecution in the “land of the free.”

If only writer / director Ramin Bahrani had managed to achieve the same in his adaptation of Ray Bradbury’s cult novel. Where The Handmaid’s Tale kept me gripped every week, with emotions ranging from fear to outright rage, this re-imagining of Fahrenheit 451, failed to keep my attention for more than an hour.

The film opens with a quote from existentialist writer, Franz Kafka – a pervert and a pornographer, if you believe Michael Shannon’s Captain Beatty – and then proceeds to show opening lines of well-known novels, only to have them burn to ash. The likes of Austen, DaVinci, Nabokov, Melville and Beethoven are held up as examples of excellence; only to be reduced to memory.

Set in a technology dependent Ohio, Bahrani tries to evoke the swirling graphics and imposing neon of sci-fi favourites such as Blade Runner. The cinematography is full of electric blues, smoky purples and vibrant orange. The news is state-controlled and people are encouraged to join in via emoticons – almost like a Facebook Live feed. Only information shared by the government is acceptable. Everything else is … Fake news. 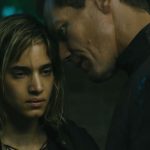 At the heart of it all is Guy Montag (Michael B. Jordan), a fireman tasked with seeking out “eels” and burning their collection of books or banned information. “Why do we burn?” he asks a baited crowd, “For happiness!” He believes, initially, that burning books makes all citizens equal as their is no knowledge or intelligence levels to separate or quantify.

The soundtrack offers a sense of foreboding and tension that the action never really delivers on. The delicious rendition of Satie’s Gnossienne No 1 really makes you catch your breath. However, there are a couple of stand out scenes. The first being when an elderly woman (played beautifully – albeit briefly – by Lynne Griffin) stands up to be counted as a “martyr” for the book burning cause. With several paperback classics strapped to her body, she lights a match and allows herself to be enveloped in the kerosene flames.

The second scene is when Montag holds a book in his hands and begins to read out loud to Beatty. He practically jolts when the book lands in his hand – as if he is holding our entire past, culture, heritage and truth in his hands. Which, of course, he is. What this rendering of Bradbury’s novel fails to convey is the power of literature to shape and change minds; to revolutionise a way of doing things; to provide sheer escapism. Sure, books are dangerous, but there’s never any allusion as to why.

The character of Clarisse (Sofia Boutella) is almost an afterthought – unlike Julie Christie in Francois Truffaut’s 1966 version – as Bahrani chooses to focus so heavily on Montag and Beatty.

I did wonder if Fahrenheit 451 would have worked better as a miniseries, like The Handmaid’s Tale. There is so much crammed into the 1 hour 40 minutes run time. And, despite that, the characters aren’t fully developed or, dare I say it, interesting, and the true essence of the novel is blithely skipped over.

Bahrani has created something that is less bonfire, more damp squib.