For many Gasper Noe is seen as the bad boy of art house cinema. His films tend to polarise opinion and as a consequence he is rarely out of the limelight. A darling of the Cannes Film Festival, he once again used this stage to premiere his latest work. With a title like Climax and a recent history of bringing 3D pornography to the screen with his last film Love, it came as a surprise to see that most of the initial reviews were positive and some actually praised the director for showing a little restraint in his work. The film has just screened at the Sitges Film Festival giving more people the chance to catch the movie and make up their own mind about his latest work.

As with most of his films, Climax deals with Noe’s obsession with the human body. Here he uses the medium of dance to get his point across. A dance troupe that has been rehearsing for three days solid are having a celebration party ahead of them moving their show from Paris to New York. It is raucous and full of energy as the troupe show off their latest work. They are based in an old school that provides them with the peace to work and the facilities that is required for 20 dancers. As the night moves on the celebrations start to turn sour as people begin to act strangely. It appears that someone has spiked the Sangria. Confusion and paranoia start to take hold.

Noe uses a couple of different techniques to get the story across to the audience. To begin with he uses an extended series of video interviews with the dancers. This serves as an introduction to the cast and in the questioning from behind the camera, a hint of what lies ahead for them and us. From there it is into the dancing at the party. The first dance is the choreographed routine for the show which is exhilarating. You can’t beat a good dance sequence in a film and the sequence really shows off the skills of the performers. 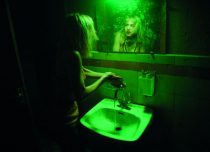 Music plays a central role in moving the story on and in setting the mood. As you would expect the majority of the tunes are dance tunes and the soundtrack runs almost continuously for the run time of the film. At first at accompanies the dance floor activities but as the drugs start to take hold the tracks start to reflect the state of mind of the increasing paranoid individuals.

To complement the music the cinematography is quite superb. Often it is a single camera that moves with the particular character that is the focus. These are continuous un-edited scenes that allow you to get inside of the protagonists head. It’s a very effective technique that he uses a number of times without it becoming overfamiliar.

The descent into collective madness is signposted by the film being split into sequences with titles cards about life, death and pain. As the dancers start to unravel the film almost seems to speed up as the single camera technique flits from one person to another in quick succession almost without pausing. Just when you think the on screen mayhem couldn’t get any more tense the power goes out and everywhere is bathed in and an eerie red colour from the emergency lighting. It marks the final descent into the film’s manic conclusion.

Climax will either enthral you or leave you bored. Either way it will leave an impression.