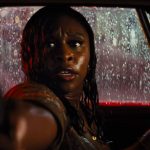 “It all starts with a simple choice. Which side are you on?”

The state line dividing California and Nevada runs right through the El Royal hotel in Drew Goddard’s film. You can choose which side of the line you’d like to spend your time on. Drinking and refreshments are allowed on the California side, but the Nevada end has just lost its gambling license. It’s an establishment that has been lifted straight out of a classic pulp noir; full of faded glamour and crumbling décor. Oh, and more than it’s fair share of secrets …

2018 has been lacking on the film front for me. I can’t recall the last time I’ve seen so many prequels, sequels, reboots and franchises. Something truly original and fresh has often seemed out of the question. It’s for that reason – as well as many others – that Bad Time at the El Royale packs an almighty punch. It’s so different; tense; captivating. With a snappy script and an equally impressive ensemble cast, Goddard has created a truly stand-out cinematic offering.

Why are all these people truly here? Are they who they say they are?

The film is packed with so many thrills and spills that it almost seems like you’re never going to piece it all together. It’s unusual for a film to have its entire plot unravel in just one location, but the multi-stranded narrative, double-crosses and half-truths will keep you engaged until the very end. As the trailer suggests, the guests are being watched through two-way mirrors by the mysterious “management” of the hotel. But, as this story unfolds, you’ll realise this is the least of the plot twists. 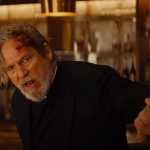 You cannot fault a single performance of the lead cast. Jeff Bridges moved me almost to tears as the ageing priest; whilst Cynthia Erivo puts her goddess-like vocal abilities to good use. I loved the character arc that Lewis Pullman portrayed through Miles. What really surprised me, though, was how good Chris Hemsworth was at playing an absolutely twisted fuck. It’s no surprise that his characterisation has drawn comparisons with some of recent history’s more unsavoury characters.

El Royale is a film that really neatly reflects the time in which it is set. Adopting Tarantino-esque title cards, it luxuriates in the faded glamour of the hotel; a place in which the secrets are swept under the rug with the rest of the decay. The very fact that the place is divided in to two sides underlines the socio-political unrest of the era – complete with footage of Tricky Dicky and flashbacks to the Vietnam War. And, with all of the characters positively sweating under the burden of their secrets, the place could even just be one giant allegory for purgatory.

Goddard’s script is meticulous – no single line is a throwaway or without subtext. It has as much flair as the once thriving hotel. Every touch, every glance alludes to something else. And, one scene in particular reminded me of Edgar Wright’s Baby Driver in the sense that every syllable and every movement could be matched to the beat of a metronome. It was thrilling in its intensity.

As original content goes, Bad Times at the El Royale may well be hard to beat. It was exciting, challenging and brimming with tension. The performances are a joy to watch and the cinematography was just beautiful. A really refreshing cinema experience.