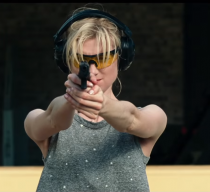 Steve McQueen is one of the greatest filmmakers of his generation. His unflinching gaze has haunted us through tales of IRA prisoners, sex addicts and the American slave trade. With Widows, the director presents his most accessible film to date, but don’t think he’s going soft on us. Based on the British ITV series of the same name, McQueen pairs up with writer Gillian Flynn to update the story for the big screen. A tightly wound heist thriller, it’s uncompromising in its message even if it does overstay its welcome by twenty minutes.

From the offset we’re presented with an explosive set piece that jolts you from your seat. A botched robbery ends badly for Harry Rawlins and his crew when they’re violently murdered by a SWAT team. That Harry is played by Liam Neeson and Jon Bernthal is part of the gang, McQueen and Flynn waste no time in letting the audience know that all bets are off. No one will be safe in this movie, it doesn’t matter how big a star you are. This creates a sustained tension that makes us weary of getting too close to any of the characters, an ensemble cast consisting of Viola Davis, Michelle Rodriguez, Elizabeth Debicki, Colin Farrell and Robert Duvall. If Liam Neeson can die, so can they.

Harry’s death is understandably upsetting for his widow Veronica (Davis), not that she’ll be allowed to grieve in peace. Harry’s crew stole from crime boss Jamal Manning (Brian Tyree Henry), and he makes it clear to Veronica he wants his missing $2 million back. With no means to raise that sort of money Veronica turns to a job Harry had planned, one that will net her $5 million. With no crew of her own she reaches out to the other woman who were widowed along with her, Alice (Debicki) and Linda (Rodriguez). With little experience, the women form a unique bond, motivated more by fear than greed. 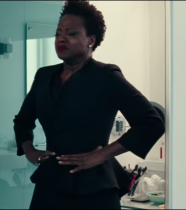 Their motivation is the driving force for the story, creating a popcorn munching heist thriller wrapped in an intense character drama. This motley crew are thrown together by fate, sentenced to the crimes of their husbands making them very desperate. It creates incredible conflict as Veronica assumes the role of leader, much like Harry was, except she doesn’t have the respect of her partners. She hasn’t earned it and despite her cold and stony front, this is someone barely holding it together. Davis is excellent, keeping her fragility lurking under the surface as we peer through the cracks in her assertive manner.

As we slowly see Veronica thaw, Linda and Alice are forced to toughen up as they’re given a crash course in criminality. It forces them on similar paths with both Rodriquez and Debicki turning in great performances and holding their own with Davis. It’s a volatile dynamic that threatens to boil over however they’re in too deep and know they must see the job through to the end.

The first hour of Widows shows film of the year potential, it’s a shame that the plot starts to get bogged down as we pass the midway point. Belle (Cynthia Erivo) is introduced to the gang and although Erivo is great in the role, it’s another character in an ever growing cast that all get their deserved screen time.

Unfortunately this adds to the run time and with the film nearing its conclusion, there’s a feeling of urgency to tie up all the loose threads. Nothing is left unresolved but it doesn’t result in satisfactory resolutions. What seemed important earlier is hastily concluded, a little too neatly considering the tone throughout. It ultimately shows that Widows was based on a TV series with many of the plot points owing more to that narrative format. 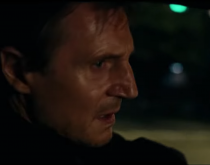 The heist itself is fun to watch and the tension lurks throughout. As a crew, it’s hard not to root for them, even if they are committing a crime. They’re not the villains of the piece, Widows has plenty of them. That doesn’t make them the heroes by any stretch, but it does give us characters to rally behind, thanks to brilliant performances and the depth of the writing. With a great cast and complex characters, Widows is an exciting drama that continues McQueen’s strong run of form. It’s another hit in the director’s glowing resume with McQueen proving once again he’s one of the freshest and most stimulating filmmakers working in the mainstream.