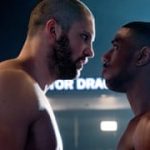 Ryan Coogler’s 2016 film Creed gave us all an insight into the Rocky “universe” that we didn’t know we wanted. Grossing over $170m at the box office, it breathed new life into a much-loved series of films and brought back the ever-popular Sly Stallone character. Passing the director’s mantle to little-known director, Steven Caple Jr, was perhaps a bold move for the highly anticipated sequel. So, did it pay off?

On the whole, yes. Creed II is every bit as thrilling and nostalgic as it’s predecessor. There are a couple of pacing issues – the film lulls a couple of times in the middle and I maintain that Adonis (Michael B. Jordan) and Bianca (Tessa Thompson) have zero chemistry – but, on the whole, it neatly balances emotional, personal stories with events in the ring.

Of course, the big draw of the film is the return of Ivan Drago (Dolph Lundgren, looking every inch a viable threat). He’s brought along his man-mountain of a son, Viktor (Florian Munteanu), in a bid to challenge Adonis for the heavyweight title. Cue lots of footage of Apollo’s fateful bout in the ring with Ivan. It’s a high stakes fight, with lots of family history involved.

None more so than of Viktor himself. He is fighting, not just because it’s easy for him to knock someone out, but because he has such a shitty life in Ukraine. He and his bullying father are outcasts, struggling to find acceptance and, ultimately, restore the Drago name. He’s not a straightforward “bad guy”; there are many layers to his story. I have also never seen a man with hands bigger than a dining table and a neck as thick as a tree. He’s a towering, taciturn figure with an interesting back story that plays out well against Adonis’ main storyline. 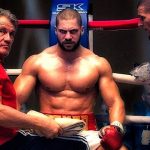 Stallone is every bit as charismatic and heartfelt as he ever was. The Rocky character has evolved and matured into a true mentor figure, and he is every bit as relevant, witty and nuanced as he was when he first burst onto screens back in 1976. Michael B. Jordan continues to excel as Adonis, echoing his father’s war cry of “I’m dangerous!” as he battles against injury, personal demons and, of course, Drago himself.

The cinematography throughout is incredible. Adonis trains against a backdrop of warm, earthy tones whilst Viktor is always swathed in steely blues and cold greys. Some of the in-fight action literally puts you on the receiving end of a punch. The camera, constantly, swirling the ring, places you toe-to-toe with Drago. The tension that is created as Creed and Drago enter the ring is palpable and the score – which blends the classic Rocky theme with thumping contemporary – adds to the overall feeling of butterflies as you anticipate the fight.

Creed II offers up plenty of throwbacks to Rocky IV, and some outright mirroring of events, but still delivers enough new content to keep things interesting.