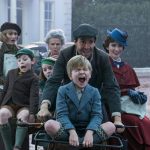 It’s a sequel 54 years in the making. That should tell you something about how beloved the original Mary Poppins is. The titular, no-nonsense nanny at the heart of Disney’s 1964 film was – famously – not there to save the children, but there to save their parents. So, how do you improve on a film that is “practically perfect in every way”?

Well, I guess you start by creating a film that is less of a sequel, and more of a truly loving homage to the original. Director Rob Marshall has chosen to pick up the story with Jane and Michael Banks (Emily Mortimer and Ben Wishaw, respectively) as adults facing just as many challenges and turmoil as their parents did. Emily has inherited her mother’s sense of social justice, whilst Michael has all the flustered appearance of his father. The film opens with beautiful painted title cards – depicting scenes such as the bird woman outside St Paul’s – and a song from Lin-Manuel Miranda, as Jack the Lamp Lighter.

The casting is spit spot-on. Emily Blunt successfully manages to make the role her own – no mean feat. She rolls her eyes and chides the Banks’ children every bit as well as Julie Andrews did. She is simply radiant in the titular role; perfectly coiffured with a dainty singing voice. There is a clear sense of fun in her character and she plays off really nicely against Miranda’s homage to Bert. Miranda fills the screen, gazing in wild-eyed wonder, clearly loving his turn as a cheeky Cockney.

The Banks children – played by Pixie Davies, Nathanael Saleh and Joel Dawson – are earnest and endearing. Meryl Streep and Angela Lansbury make fun and high-spirited cameos but, really, the only special guest star I wanted to see was the legend himself, Mr Dick Van Dyke. It’s almost incredible to think that he’s 93 as he tap dances his way across the screen, leaping on tables. His eyes glint, so full of mischief and glee – it’s wonderful to watch. 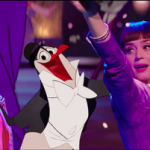 Sandy Powell’s costume design is simply stunning, particularly in the fantasy sequences, where the colours are simply bursting from the screen. In another familiar touch, the fantasy scenes are all drawn in 2D animation – the first Disney film to do so since 2007’s Enchanted – and it absolutely works. It doesn’t feel outdated, it feels charming and a nice companion to the live action. CGI or any such illustration would seem out of place with the smoky London skyline and cobbled streets of Cherry Tree Lane.

The songs in the film are certainly catchy enough – you’ll find your toes tapping or your eyes welling – but I’m not convinced they are as memorable as the originals. Tripping The Light Fantastic and There’s Nowhere To Go But Up (a clear nod to Let’s Go Fly A Kite) stand out as being the best of the soundtrack. That being said, I’m sure after a few viewings that I’ll find myself joining in. Marc Shaiman’s score also incorporates lots of motifs from the 1964 film.

Indeed, there are many nods to the original – Dick Van Dyke gets his name muddled up in the credits, the tap dancing penguins appear, the original Jane Banks (Karen Dotrice) has a cameo, and Colin Firth gets to exclaim “What’s all this?!”. There are so many “easter eggs” for Poppins fans to spot throughout that it probably will require multiple viewings to spot them all.

This is a fun, whimsical sequel with enough to keep “fresh” viewers entertained whilst offering so much nostalgia even the most cynical of viewers will smile and warm to it. With it’s heartfelt tale of family values, a hint of romance and excellent performances, Mary Poppins Returns is sure to your lift your spirits and send them soaring …