Once the darling of Hollywood, M. Night Shyamalan became a bit of a laughing stock amongst critics as his films got more absurd and less interesting. Known for his shocking and at times ingenious twists, Shyamalan had a poor run of form with big budget films that culminated in 2013’s woeful After Earth. In 2015 he teamed up with Blumhouse productions, who have mastered the art of high box office returns on smaller budgets, for The Visit. The film received mixed reviews but it was arguably the best thing the director had done in years. It was also very profitable.

The partnership continued with Split, a horrifying tale about Kevin (James McAvoy), a young man with dissociative identity disorder that has manifested into 23 different personalities. Kevin is able to live a normal life for the most part with one of his identities, the harmless Barry, taking the light as he calls it. Not all the personalities are benevolent and when Dennis takes the light he kidnaps three young girls and locks them up. Having aligned himself with another identity, Patricia, the two lay out their plans for the girls, suggesting they will be an offering for a new personality yet to emerge, The Beast.

With Split Shyamalan shows why, when he’s on his game, he’s a masterful storyteller. He presents a no frills story that’s beautifully simple in its execution despite the complex premise of its main character. McAvoy is magnificent as Kevin as he transitions from one personality to the next. Each character he portrays is uniquely different as he elicits sympathy for one persona while terrifying us with another in the same scene without so much as a cut. It’s an extraordinary performance by the Scotsman. 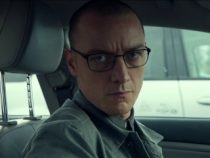 As to be expected of a Shyamalan story, audiences will be anticipating a huge twist. It’s difficult to describe the reveal without spoiling it (although it shouldn’t be much of a surprise if you’re reading this review) but rest assured that although it’s divided audiences, while many gasped in astonishment and got excited for what would come next. Shyamalan teases us through the film with flashback sequences of one of the girls Casey (Anya Taylor-Joy). Her own tragic past is carefully unravelled with Kevin’s psychiatrist, Dr. Karen Fletcher (Betty Buckley) providing an interesting link between the abductor and his abductees, Casey specifically. The tension is unbearable as we worry about what The Beast is and what it’ll do to the girls, however the most uncomfortable scenes are perhaps Kevin’s appointments with Fletcher as Buckley and McAvoy perform a subtle game of chess through conversation, albeit one that could result in severe consequences.

The end result is a thrilling horror that’s mercifully unpretentious in its execution. Exciting and chilling, Split will have you glued to the screen as you hug the edge of your seat.