Paul Feig defends Leslie Jones’ over her scathing comments on the new Ghostbusters film. Jones, who starred in the 2016 reboot, was less than happy about the franchise ignoring the previous installment .

“So insulting. Like f–k us. We dint count. It’s like something trump would do. (Trump voice)”Gonna redo ghostbusteeeeers, better with men, will be huge. Those women ain’t ghostbusteeeeers” ugh so annoying. Such a dick move. And I don’t give f–k I’m saying something!!” 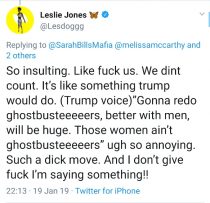 Feig, who directed the movie, defended both Jones and his work in a tweet sent from his personal account.

“An absolute honest to God never ending supply of bullst– and hate from these trolls. Leslie spoke her truth and I support her. I am very open to Jason’s new version of GB but am also sad that our 2016 team may not get to bust again. We all are. We’re forever proud of our movie.” 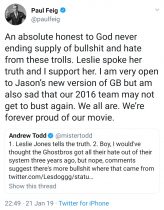 The reboot generated controversy with online trolls lamenting the casting of four women in the lead roles. Jones herself was subject to vile racism in what appeared to be organised attacks.

Jason Reitman’s movie will ignore Feig’s which wasn’t a continuation of the first two, and although it will unlikely mirror the previous film’s casting, no one has been cast as of yet. Like Feig’s effort it appears to be unfairly slammed by critics at the early stages and although the cast and crew may feel aggrieved, it didn’t get the box office numbers Sony were looking for to make a sequel. It wouldn’t be the first series a studio has returned to only to ignore previous installments with 2018’s Halloween being a direct sequel to the first movie and what will be the sixth Terminator acting as a follow-up to T2.

Little information is available for Ghostbusters 3 but you can view the teaser trailer below.