Man’s best friend. An undeniable source of loyalty, support and internet memes. Yes, we’ve been keeping canines as pets or, in fact, worshipping them as far back as ancient Aztec civilisations and Greek mythology.

Our four-legged chums are said to heal anxiety, loneliness, grief and stress. They can also, as Hollywood would have it, be a brilliant source of entertainment. Whether animated or in the flesh, dogs having played a major part in cinematic narrative for a long time.

Take a look at our Six of the Best: Dogs in Films and let us know, in the comments below, if we have missed any of your favourite big-screen pooches. 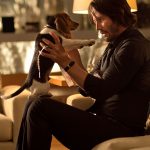 She was the beagle who spawned a violent revenge trilogy. Whatever you do, don’t fuck with Keanu Reeves’ pets. Daisy, that adorable little puppy, brutally murdered fairly early on in the film. And that just didn’t sit right with Wick. Blow up his house, smash all his windows, sure. But, my God, do not take the dog down, too. It’s probably one of the most well-known – if short-lived – doggy appearances in recent cinema. 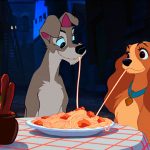 Lady and the Tramp

One of the original and best. Bella Notte softly playing in the background, there are many films that have lovingly parodied the sharing of spaghetti and meatballs. In true Disney style, the film is full of chaos and capers; colours and caricatures, with a hefty soundtrack to accompany all the action. It’s a classic tale of a true love triumphing over class differences. Oh, and the great jazz singer Peggy Lee also lends her sultry vocals to proceedings. 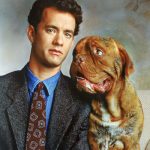 Tom Hanks tries to solve the murder of a friend with the deceased’s dog. That’s all you need to know. Not one of Hanks’ most Oscar-worthy performances but, hey, it was the 80s. Big dogs wreaking havoc and destruction was definitely trendy then. The giant Dogue de Bordeaux used in the film is a neat contrast to the lanky Hanks, who did not agree with the film’s attempt at a “tear jerker” ending. 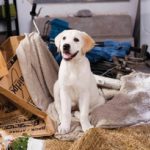 Forget the Andrex puppy, it’s all about the adorable golden Labrador adopted by Owen Wilson and Jennifer Aniston. More than anything, this film is a testament to the impact that a pet can have on a family as it grows along with them. It’s super schmaltzy at times – almost like it’s trying to wring the tears from your eyes – but it’s a nice feel-good family effort. 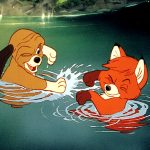 The Fox and The Hound

Another Disney classic making its way into our top six – they sure do love dogs for a company built on the success of a mouse. If you can make it through this 1981 classic without crying, there is something wrong with your tear ducts. The unlikely friendship between the titular characters is put to the test as, in adulthood, their new “jobs” see them forced against each other. Altogether now: “You’re the best of friends and life’s a happy game …” 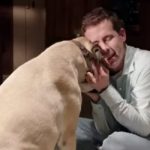 One of the best black comedies I have seen in a long time sees Ryan Reynolds star as a murderous psychopath, egged on by his pets … Who, of course, can only be heard inside his head. Reynolds provides the voice for Bosco, a large slobbering mastiff, who’s main concern is where his next meal is coming from. It’s brilliant comedic relief from, ya know, all the murdering that’s going on.

2 thoughts on “Six Of The Best: Films With Dogs”