Another WolfCop promises exactly what it says on the tin…a sequel to WolfCop. For that, at least, it can be commended. Lou Garou (Leo Fafard) returns as the alcoholic werewolf with a badge. Quite content with ripping bad guys to pieces, Garou soon uncovers a diabolical conspiracy in his town. Local politician Sydney Swallows (Yannick Bisson) looks to seduce the locals with his “Chickenmilk Stout” which will impregnate them with muppet like alien babies. Werewolves vs Aliens? The premise is a big hurdle for Lowell Dean’s sequel, one which he fails to clear.

When a movie is called WolfCop to begin with, few would take your side if you started crying about logic taking a back seat. Yet, while the first movie stayed in its lane, Another WolfCop throws the kitchen sink at the dartboard in the hopes for a bullseye. Unfortunately, little sticks and the movie becomes bogged down with an overt level of zaniness that doesn’t gel. There is a severe lack of fun to be had beyond its awesome Cobra inspired poster.

The alien plot which replaces the occult premise of the previous movie is a misstep as both genres refuse to play nice. The result comes off as a series of sketches as opposed to a fully fleshed out plot. Which is a shame, as the movie works best in its opening scene as we see Garou, in full werewolf mode, slaughter a gang of bank robbers who attempt to evade justice. It’s gloriously over the top and showcases the gory madness of the titular Wolfcop. When the aliens arrive the joke falls flat and the film never recovers. 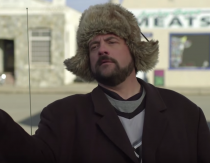 The jokes are fast and frequent but the laughs don’t come. Many of the punch lines become repetitive and don’t get any funnier the second or third time they’re attempted. Jonathan Cherry returns as Willie Higgins, with some soap opera style explanation as to why he’s no longer the bad guy. It’s pretty weak however Cherry is given some of the best lines and does well with the material. His comic timing is on point and although painted as the proverbial loser of the story, exhibits the most charm and gets the biggest laughs. The special effects are predictably amateurish but not so much when it comes to Garou’s transformation. It looks truly remarkable as he peels off his human skin to reveal the furry monster underneath. It’s expertly shot and edited, hinting at the true talents of the filmmakers.

It’s clear that Dean is heavily influenced by Troma movies; with excessively cartoonish, violence, gratuitous nudity and wildly insane plot. It’s a proven formula albeit not necessarily one for success. Another WolfCop tries to do too much to standout, forgetting about its simple premise that brought it to the dance in the first place. Even a cameo from Kevin Smith can’t save this sequel from its own pitfalls. What sounded great on paper is poorly executed in the final concept. With another movie teased to round off the trilogy, there is still time for salvation in the WolfCop series, regrettably there isn’t any to be found here.