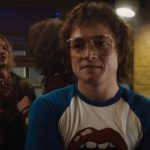 “Maybe I should have tried to be more ordinary, ” says Elton John, dressed in sequined devil horns and feathers. The hotly anticipated biopic of one of the UK’s biggest music legends looks every bit as dramatic and daring as the singer himself.

Starring Taron Egerton – who is performing all of Elton’s tracks himself, and sounding bloody good doing so – the film looks like it will be part fact, part fantasy. There are glimpses of colourful song-and-dance sequences and insights into the imagination of the great performer.

Co-starring Jamie Bell as Bernie Taupin and Richard Madden as John Reid, the film focuses on Elton’s breakthrough years, before he became the man behind international hits such as Candle in the Wind and Goodbye, Yellow Brick Road. The film starts off with plain old Reginald Dwight, who lives at home with his mother (Bryce Dallas Howard).

The opening of the trailer is actually reminiscent of the John Lewis Christmas advert, with the young Elton working out rhythms on a piano in his dressing gown, before bursting with the colour of performance and success.

Dexter Fletcher is back in the director’s chair, following fan and Academy favourite, Bohemian Rhapsody, with another glimpse in to the British music industry.

Rocketman is due for release on May 24.

One thought on “Rocketman – First Trailer”