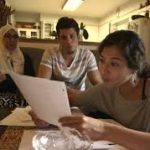 Fear and paranoia are two incredibly useful tools in the search for control. If you create enough fear surrounding a particular community, ethnicity or religion, it almost creates a need for surveillance. If you make someone paranoid enough – has that car that’s been across the street for the past three days always been there? – you create a suppressed and unnatural way of living.

And that’s exactly what was happening in the Arab-American neighbourhood of Bridgeview, in the state of Chicago, since the 1980s. Journalist Assia Boundaoui’s documentary doesn’t expose some post-9/11 generated Islamophobia, but decades of unnecessary persecution against a peaceful yet scared community.

The FBI – in particular an agent named Robert Wright – seemed intent that the congregants of the Mosque Foundation within the Bridgeview neighbourgood were funding Hamas and Hezbollah through an elaborate money laundering scheme. Women in headscarves, some speaking broken English, found themselves with suited and stern agents at their door, asking a myriad of confusing questions about who they knew and what charities they were involved in.

It was a campaign that became known as Operation Vulgar Betrayal. How’s that for dramatic? Boundaoui’s documentary demonstrates the lasting impact of the investigation – a community that will not speak to camera for fear of reprisals and decades of crippling paranoia and whispered conversations. It’s somewhat ironic that, in order to counter nearly twenty years of surveillance, Boundaoui’s only option is to record her life and the impact of OVB.

The psychological strain of being careful about what you say in the street, on a call or via text and email has left many Bridgeview residents weary. At one point, Boundaoui’s brother urges that the family should all leave the area before things get much worse. However, the looks exchanged between Assia and her mother seemed to suggest that they felt that they would never be able to escape their pursuers. They would be on some sort of watch list or have a target on their back wherever they might go.

Growing up as an Algerian American, Boundaoui states that she did everything she could to hide her identity. She did not wear a hijab, she did not speak Arab or with an accent and she did all she could to melt into the background in school. She knew, from the outset, that her religion and her ethnic background would make her a target. And it still does, to this day. As she is filmed voting in the 2016 election, she is seen receiving reams of hostile tweets from Trump supporters.

Boundaoui herself is a victim, despite the strength she displays in pursuing her investigation. One of her earliest memories is of the FBI installing a bug in the phone tower outside her bedroom at 3am. Her Freedom of Information request – which alludes to over 33,000 pages of FBI surveillance – leads to ghosts from her family’s past resurfacing in a cruel and unsettling way. Suddenly, a speed bump is installed right outside her living room window, giving any car that passes the perfect excuse to slow down. To many outsiders, it would be easy to dismiss this as simply a road safety exercise but growing up in Bridgeview has left an undeniable imprint on its residents.

What this documentary does is highlight the lengths that the FBI were going to to try and prove a link between mosque attendance and terrorism. There’s a particularly shocking scene involving a tank that proves that, to this day, there is clear bias towards this community who, coincidentally, show themselves to be nothing but peaceful and loving throughout the entire film. At times, it feels like you are watching an elaborate Hollywood thriller, such is the tension.

Boundaoui also lists a series of smear campaigns – dating back to 1917 and a doctrine of fear against Japanese Americans – that have been aimed a minority communities throughout American history. Every one clearly demonstrating a fear of the “other” – be that a way of life or a skin colour perceived as a threat to good ole apple pie way of doing things.

The Feeling of Being Watched never allows itself to be earnest and pleading. At no point does Boundaoui point a metaphorical big stick and yell, “See! We’re Muslims and we’re NICE.” Instead, she allows herself to be filmed whilst angry, frustrated, scared, crying and empowered. She is not afraid to stand up to authority and ask the questions that need to be asked. She is not – as she accuses some of the others in her community – taking her place at the table for the sake of it. She is there on merit and on truth.

Boundaoui closes the film with a shot of panopticon prison, not too far from her home. It’s a circular jail that exposes the prisoners to each other and to the watchtower at all times. There is no peace, no respite, from the watchful eye of others. And that is exactly how she and the residents of Bridgewater feel in their own homes.

The Feeling of Being Watched is being screened at the Glasgow Film Festival as part of the Stranger Than Fiction strand. It is also nominated for the Audience Award 2019.