The Wild Pear Tree is the latest drama from director Nuri Bilge Ceylan. The former Palme d’Or winner has received critical acclaim for his previous work and his latest film has been inundated with similar plaudits. Sinan (Aydın Doğu Demirkol) has a desire to make a living as a writer. He returns to the Turkish village where he was born in the hopes of scraping together the money to produce his book. His passion for literature oozes from him, often putting him in conflict with his family, friends and peers.

Ceylan isn’t blunt with his critique of his culture yet he does so with overwhelming respect. Much of the film has Sinan in discussion with an opposing viewpoint which creates wonderful dialogue and thought-provoking ideas. The ideology of the traditional minds come into conflict with Sinan’s ambitions but there is no judgement to be had. Instead we’re treated to enlightening topics and the odd cutting barb that will elicit a laugh that prevents the film from drowning in its own existentialism.

The biggest issue is the runtime. Like his last film, Winter Sleep, The Wild Pear Tree clocks in at over three hours. Although a thoroughly engaging and thought provoking film the first hour will test the patience of a home audience. Nothing much really happens and it isn’t until Sinan meets writer, Suleyman (Serkan Keskin), that the script really grabbed me and pulled me in. The conversation the two have about literature is mesmerising however that first hour is a tough hurdle to overcome.

The relationship between the movie and literature is evident throughout and despite how stunning Gökhan Tiryaki’s cinematography is, The Wild Pear Tree is like watching a book. Ceylan’s own love affair with literature saturates the plot, almost to the point that it feels like film is the wrong medium for his story. 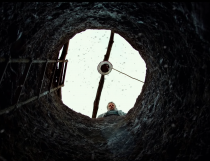 That’s not to say it doesn’t work in the chosen format. There are many beautiful shots with Ceylan allowing the camera to linger, framing his scenes with an awe that allows the viewer to appreciate the visuals. The absence of a traditional score is only made the more powerful by the repeated use of Leopold Stokowski’s performance of Bach’s Passacaglia in C minor. The leitmotif of the music pulls you in when and how the director wants you to.

The performances are magnificent with Keskin arguably stealing the movie in his limited screen time. His nuanced and quietly fiery portrayal of the veteran author is slowly pushed to frustration by the slightly arrogant and provocative Sinan. Keskin presents Sinan as likeable with just the right amount of smugness as to keep him on your good side. Murat Cemcir and Bennu Yıldırımlar are brilliant as Sinan’s parents; complicated and layered with depth they represent aspects of the traditional obstacles of Turkish culture that our protagonist must overcome.

At over three hours long, The Wild Pear Tree would have benefitted from a leaner runtime. The first act is filled with much exposition of Sinan’s character that could have been trimmed extensively and yielded the same result. Regardless, it is a cerebral yet accessible story that rewards your attention and endurance.