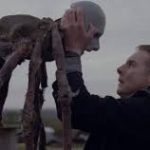 A quote attributed to Einstein claims that the very definition of insanity is “repeating the same process over and over again, but expecting different results.” And yet, that’s exactly what Philip is doing throughout Possum. For reasons unknown, his career – and reputation – is in disrepute and there’s a strong suggestion that it has something to do with the mysterious creature lurking in his brown leather travel bag …

Possum is a film that doesn’t really let you breathe. From the outset, the score (composed by The Radiophonic Workshop) and the jilting, disorientating cinematography sets you on edge. Writer / director Matthew Holness doesn’t give away too many clues – and that lack of information, in itself, is unsettling. It’s a film that raises many more questions than it answers, and goes all out on psychological scares along the way.

The film is washed in dull greys, murky blues and moss greens. It feels almost sepia, save for a few momentary bursts of colour. Philip (Sean Harris, utterly incapable of a bad performance) has returned to his childhood home, presumably to address a few demons. The home itself is in a complete state of disrepair, with closed doors and singed edges – perhaps a metaphor for Philip’s mental state.

His gurning, yellow toothed step-father (Alun Armstrong) seems keen to stick a knife into Philip’s apparent wounds at every turn. He goads him about his failed career and his upbringing in the house, forcing him to recall horrible memories of violence and death.

Meanwhile, Philip is desperate to finally rid himself of a nightmarish puppet – the head of a man attached to six, spider-like legs – that haunts his adult dreams and childhood memories. He drowns it in a river; he buries it in a wood; he burns it in a metal barrel. And yet, no matter what he does, the monstrous marionette ends up back in his possession. It’s in his travel bag; it’s on his walls; it’s in his bed. It’s a truly terrifying creation and the uncertainty as to its whereabouts sets Philip – and the viewer – in a spiral of fear. 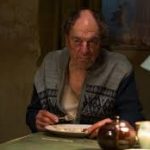 The dynamic between Philip and his step-father is realised perfectly by the two lead actors. Armstrong and Harris absolutely carry the film with their performances. Armstrong is the very definition of bitter and twisted, living amongst filth and haunted trinkets of a questionable past. Harris is utterly captivating as his mental health declines; he regresses to a vulnerable child, curled up in his bed, afraid of the monsters – quite literally – under it. Their relationship – uncertain at first – is one that is nasty and abusive, and it is played out flawlessly by these two bastions of British acting talent.

As Philip’s mental health declines, the presence of the puppet grows. You never quite know when it will next appear. And this is where the questions start to arise. Why did Philip create something so horrific for children’s entertainment? Why is his childhood bedroom full of smoke damage? Why is there a journal full of ghoulish drawings and why was that teenage boy on the train – now missing – drawing those exact same pictures?

As I said, it’s a film that raises so many more questions than it dares to answers. And in that sense, it leaves the events that unfold entirely open to interpretation. Perhaps everything we see is purely the result of Philip’s traumatic mental health. I took the title as indicative of Philip’s abusive relationship with his step father. Perhaps, if he learned to play dead, he would be left alone.

Possum is a great example of British horror and an interesting exploration of a loss of control and spiralling fear, guilt and trauma. It’s well-acted, well-paced and well-written, with each viewer able to take away their own conclusions from the film.

Possum is out on DVD and Blu-Ray now.