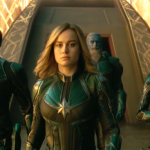 I’m going to hold my hands up. Prior to yesterday’s viewing, I was deeply sceptical about Captain Marvel. I was worried that, instead of being pure, superhero fun, that it was going to be a moralistic berating on the lack of feminism in the MCU. I don’t go to popcorn blockbusters to be lectured, I go for the escapism. So, I’m thrilled to say, that I couldn’t have been more wrong about Ms. Danvers.

That being said, it didn’t start off on the best foot. The opening battle sequence is dark, dusty and disorientating. It didn’t really inspire. And, as with most of the Marvel films, the battle scenes are doing less and less for me – I’m more interested in well-rounded characters and logical plot development.

However, once Captain Marvel gets going, it really does fire on all cylinders. This is Marvel’s first female lead and they are not holding back. Neatly setting the scene for what may or may not happen in Endgame, this is also an origins story with enough plot twists to keep you hooked. This isn’t just a filler piece before the bigger film comes out in the summer.

Without giving too much away, the film centres around Carol Danvers / Captain Marvel’s quest to find out who she really is and take her rightful place in the universe. It’s a really fun, enjoyable throwback to the 90s, with lots of gratuitous reference to dial up internet and Blockbuster video. Carol’s backstory – with more than a nod or two to Top Gun ­– is a genuinely interesting one, as you piece it together her past alongside the strongest Avenger.

It also boasts a really entertaining cast: Aside from the quick-witted Brie Larson, the likes of Annette Bening, Samuel L. Jackson, Jude Law and Ben Mendelsohn appear. It feels like a big deal. The performances, from all of the cast, are absolutely spot on. Jude Law really does excel at slippery, whilst Ben Mendelsohn offers up another beautifully layered character. 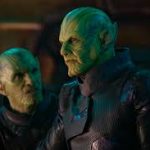 Larson, of course, is really enjoying herself. She’s strong yet vulnerable; sassy yet endearing; super yet human. It will be great to see how her character develops in Endgame and what the future may hold beyond that. The star of the show – arguably – is Goose the cat. Sorry, the flerken. It’s another really fun touch.

There are a couple of lines about strong women and being your best self that kind of stuck in my throat, but there wasn’t anything cheesier than the usual Marvel dialogue. There is a neat little montage about two thirds of the way through, however, that may well provide inspiration for any little girl who has been told that she can’t join in; she can’t run fast enough; she needs to stick to feminine hobbies.

Marvel have, once again, succeeded in blending big, thumping action sequences with intimate, human emotion. They flip seamlessly between the two, with enough humour and light-hearted touches to keep things from getting too heavy. DCU, take note.

There’s a beautiful tribute to Stan Lee before the film starts and, obviously, a couple of post-credit teasers that should whet your appetite for Endgame, as if you needed it.

As origin stories go, Captain Marvel is certainly up there in the Marvel catalogue. A really fun, nostalgic, well-plotted addition to the superhero canon.