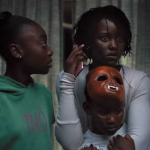 Jordan Peele’s directorial debut, Get Out, was rightly lauded for its incredible exploration of topical political, social and racial issues. It was, arguably, one of the most interesting debuts for quite some time. It was scary and darkly humorous; it had a conscience and it made you second guess your own. So, has been able to follow it up with something equally thought provoking?

The answer is a complicated one. Us, as a horror film, is excellent. It’s thrilling and likely to leave you wide eyed in disbelief. But, if you’re looking for subtext and political commentary, you’ve come to the wrong place. This is one of these films that you can take purely on face value and still have huge amounts of enjoyment.

The film opens in Santa Cruz, 1986, where Adelaide (Madison Curry) wanders away from her parents at a funfair and stumbles into a hall of mirrors. Only, that’s not her reflection she’s up against, that’s an actual whole other version of herself. Her eyes, fluorescent in their horror, tell a story that no cheap jump scare ever could.

Skip forward to the present day and the adult Adelaide (Lupita Nyong’o) is taking a summer vacay with her husband, Gabe (Winston Duke) and their two children (Shahadi Wright Joseph and Evan Alex). It’s a typical family holiday, complete with bored teenagers glued to their phones and an annoying little brother testing everyone’s patience.

So far, so normal. And yet, that feeling of uneasiness that Adelaide experienced in the hall of mirrors seems to wash over everything. Peele never really allows you to settle in and feel comfortable. And that is to great effect – Us really gets under your skin. Sure, there are some moments of light humour – dad jokes and Home Alone references – but that doesn’t take away from the bigger picture.

For me, the film felt like a blend of genre stand outs, such as Funny Games and Dead Ringers. The idea of a body double, doppelganger or twin has long been deployed in cinema, but usually for comedic effect. Here, every human has an exact replica of themselves, armed with scissors, ready to unleash bloody violence for the sake of becoming “untethered”. 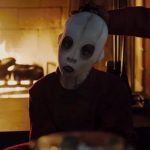 The performances are great – far from the usual horror ham – and, most importantly, the characters are well-rounded. There’s no two-dimensional scheming cheerleader tripping over tree roots or cocky jock who ends up victim number one. Even the supporting cast – including the wonderful Elisabeth Moss – have fully comprehensible plot points.

The stand out, however, is Lupita Nyong’o in her dual role as Adelaide and Red. There were so many times I could have sworn that it simply had to be two different actresses. She creates two entirely distinct characters with different voices, facial expressions and motives. The way her voice rasps and her eyes bulge when she is in character as Red is absolutely terrifying.

It just goes to show that the horror genre is moving towards more character-driven scripts that require much, much more than running and screaming. Nyong’o is, quite simply, incredible in a film that offers up so many strange and unsettling close ups of twisted faces and sinister smiles; a cinematic hall of mirrors, if you will.

There are a couple of niggling instances wherein the script over explains itself – but that really would be nit picking to declare it a fault. Us leaves you with a lot more questions than it will answers, and that’s a good thing. Horror should be every bit as cerebral as any other genre. It should stay in your head for days to come – and not just because you’re not sure if that shadow across your room is your body double, here to murder you, or a pile of laundry.

Us is, in a way, wildly different from Get Out. But, it does prove that Peele is no one-hit wonder. It will be interesting to see what he lines up next.