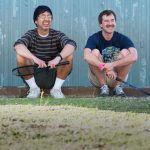 Assisted suicide. It doesn’t exactly sound like the ideal topic for a “buddy movie”. And yet, it’s exactly this tug-on-the-heartstrings storyline that makes Alexandre Lehmann’s Paddleton work. Co-written by and starring Mark Duplass, this straight to Netflix release is a strong contender for one of the most emotional films of the year.

Duplass stars as Michael, a middle-aged man who is facing down the barrel of a terminal diagnosis. He asks his friend and neighbour, Andy (Ray Romano, who is truly outstanding in this role) to support him should he choose to end his life. It sounds incredibly bleak, but what Paddleton is full of is moments of joy, humour and life.

The film feels very neat and tight, as if we are genuinely intruding on the lives of these two men. Everything – from the colour palette to their daily routine – is very muted and understated. Duplass, echoing the film’s overall tone, is dying quietly. And that is why this film works. It’s almost unbearable in its mundanity and humanity.

Netflix probably is the right platform for this film – it’s normalcy and subtlety would probably earn it one screening at 11am on a Tuesday at your local multiplex.

Lehmann has done a wonderful job of capturing the pace and emotion of the everyday – despite the melancholic circumstances. There are no outlandish speeches about what it feels like to live; no Oscar-seeking displays of emotion. Whilst so much of the conversation may seem inconsequential and lack urgency … Isn’t that how things can be in our own lives?

Romano and Duplass have an on-screen chemistry like I have never seen before. I have never felt so invested in a cinematic relationship the way I did with this pair. Allegedly, a lot of the dialogue was improvised and that is probably why their dynamic seems so natural. The neighbours are both slightly socially awkward and stick to their routine of homemade pizzas, games of paddleton and bad kung fu movies. Michael’s diagnosis upsets their lives in more ways than one. These two men – for whatever reason – really do only have each other. 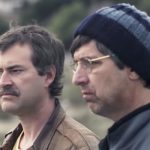 Romano does deliver the odd line of black humour but he’s not playing the fool here. This is an excellent, introspective performance from the former prime-time star. It’s really exciting to see him do something so wildly different. That’s not to say there aren’t moments of humour – the declined credit card in the pharmacy and the hotelier in the hot tub are particularly funny – but these are fleeting.

The last twenty minutes or so of the film are a really hard watch. Especially if, like me, once the tears start, it’s hard to stop. As you start to watch Paddleton, you are aware that you are on the countdown – quite literally – until the end.

By the time Lehmann nurses you gently towards the conclusion, you are so invested in these two friends; their routine; and their lives. Their co-dependency is both endearing and frightening in light of Michael’s diagnosis. These are grown men who call “goodnight” to each other through the walls of their apartments and all of it – all of the habitual behaviour and the friendship itself – is being cruelly snatched away.

The ending is quiet and whispering (which is just as well, because my blubbering wasn’t) and utterly sensitive towards the subject matter. Romano and Duplass act their asses off to create a truly beautiful piece of cinema.

Paddleton is endearing and emotional. It completely took me by surprise, in so many ways. It’s absolutely worth a watch – but you will need to keep the tissues close by.

Paddleton is now streaming on Netflix.